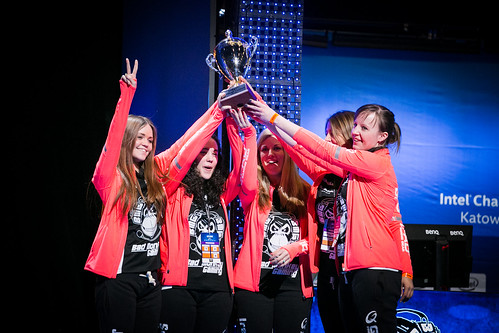 The Intel Challenge Katowice 2016 will see five invited teams from Europe, North America as well as Asia. The remaining three slots will be given to teams who prove their skill in a series of online qualifiers on ESEA, which are open to all women teams and start on January the 24th. While the North Americans will fight for one spot at Katowice, the European teams have two spots to win. The teams will be flown in for the offline group stage (5th of March) and playoffs (6th of March) with travel and accommodation provided for.

Those who make it to Katowice will take the IEM Expo stage on Sunday the 6th of March for the playoffs in front of the crowd at the Intel Extreme Masters World Championship as well as fans following the games live at home on Twitch.tv. A single-elimination best-of-three bracket including a third place decider match means there’s going to be plenty of action!

If you want your team to be considered for one of the invites, please fill out this form with all the relevant details before the 21st of January and also sign up for the qualifiers. If you don’t receive confirmation before the 23rd of January, be sure to take part in the qualifiers for your chance to join the tournament in Katowice.

All the best to those competing in the qualifiers - good luck, and we’ll see the top teams in Katowice!