The Intel Extreme Masters World Championship Katowice will see twelve top CS:GO teams from around the world compete at the legendary Spodek arena in front of thousands of fans. Eight of the participating teams received direct invitations, all of them favorites to take home the trophy. However, the qualified teams must not be underestimated - anything can happen, and we just might see some major upsets in Katowice come March.

The MongolZ secured a slot at Katowice thanks to their win at Intel Extreme Masters Taipei. The team had an incredible run at the event, impressing everyone with their plays. They finished first in their group, getting one win as a forfeit but also defeating the well-known in the western scene Renegades. They faced the second Aussie team of the tournament - Chiefs ESC - in the semifinals. Chiefs were the only team who managed to take a map off MongolZ, but that wasn’t enough to stop the future Taipei champions. The grand final was a rematch between MongolZ and Renegades with the former coming out on top in dominating fashion, scoring 16-9 and 16-2 on Cobblestone and Inferno respectively.

Now The MongolZ are headed to Katowice to face the world’s best teams including Fnatic and Natus Vincere, who they ended up in group A with. Will they rise to the challenge? Will we see more amazing plays from Machinegun and zilkenberg? We’ll find out soon enough. 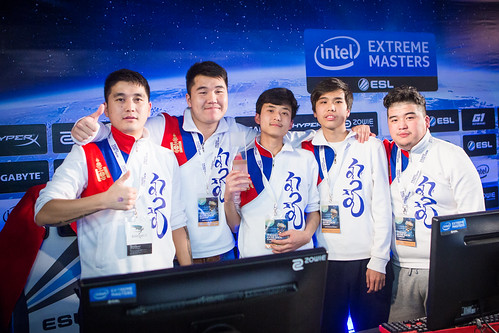 The MongolZ after their victory at Intel Extreme Masters Taipei

Two European qualifiers took place, giving a great number of teams a chance to compete among the very best. Both E-Frag and mousesports took part in the first qualifier, although the latter was swiftly eliminated in the round of 32. E-Frag, on the other hand, made it to the finals without much difficulty and snatched the Katowice slot by defeating Gambit Gaming 2-0.

E-Frag is a fairly new squad, having been formed in July last year. They have several wins from smaller tournaments in their portfolio, and the Intel Extreme Masters World Championship will be their biggest chance so far to prove themselves among the world’s best teams.

Despite a disappointing performance in the first qualifier, mousesports managed to secure a slot in Katowice in the second qualifier, defeating teams like HellRaisers, Dignitas and CPH Wolves along the way. mousesports is one of the clear veteran Counter-Strike organizations, dating all the way back to 2002. They have participated in countless tournaments, visibly dominating the German Counter-Strike scene. Intel Extreme Masters Katowice will be another chance for them to succeed on the big international stage.

Tempo Storm have very recently revived their CS:GO lineup by acquiring the Games Academy roster. The Brazilian squad went through the North American qualifier, defeating teams such as compLexity Gaming, Team Liquid, Counter Logic Gaming and finally Cloud9 to clinch a slot in the Intel Extreme Masters World Championship. Together with Luminosity Gaming, they will fight for a Brazilian victory on European soil against big favorites like Team EnVyUs and Astralis, who they are grouped with.