Of course we also have a trio of new teams who came through MDL in AGO, Space Soldiers and Team Dignitas.

The first week of play saw titans clash, rivalries revived, OT battles and a Ukrainian prodigy go absolutely ham, so let’s not waste any time and jump right into it.

We had an unbelievable 36 maps played this week, nine of which ended in OT or 16:14, which already shows just how balanced the EU division is.

A glance at the standings confirms this, as no team was able to pull ahead. Instead, most sides have an almost equal amount of wins and losses, with only LDLC (1W-5L) truly lagging behind.

Even the newcomers, Space Soldiers (3W-3L-1OTL) and AGO (3W-3L) have shown great matches and are right in the thick of it, proving they aren’t here simply to serve as cannon fodder.

Especially the Turks left quite a statement in their first series against Heroic, smashing them 16-1 and 16-5.

Astralis have managed to get off to a good start and find themselves on top of the leaderboard with 4W-3L-1OTW. After taking two victories off FaZe, and splitting maps with mouz, the Danes had to suffer two losses at the hands of their Danish rivals, Heroic.

Fnatic also confirmed their good form, besting NiP in the age old Swedish derby 2-0, and finding themselves at rank two, with 4W-3L-1OTL.

This is only the first week of a long, difficult season. But it’s safe to assume that there won’t be any easy matches for anybody. Favorites will struggle and underdogs will contend for playoff spots, in what will surely be another high-class EPL season.

Check out the full standings of EPL’s seventh season below: 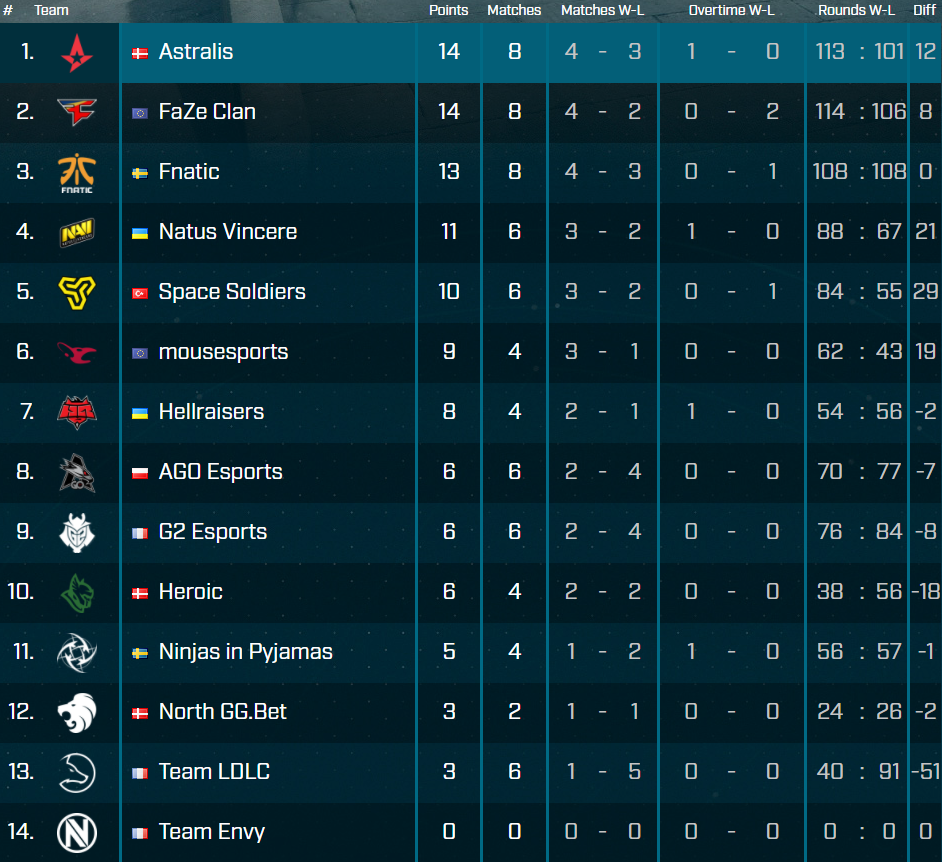 Match of The Week Recap – Na’Vi vs. FaZe

The first week of EPL has s1mple written all over it. What an absolute machine the young Ukrainian gun is. Post ELEAGUE Boston Major, s1mple has an unbelievable average HLTV-rating of 1.40. In three of his first six EPL maps, he dropped thirty bombs, two of them against FaZe – 31 frags in their 16-6 victory on de_inferno, and 48 frags on mirage, which ended 25:23 in favour of Na’vi.

s1mple is simply unstoppable right now, quite contrary to NiKo, who is in major post-Major slump, seeking his old form. Perhaps the loss to C9 in the final still weighs heavy on his soul. Whatever the reasons may be, his team needs him to perform to their full potential.

After their disastrous last season, where the Ukrainians only barely avoided demotion, it’s good to see Na’Vi back on track. It adds to the overall quality and excitement of the league.

NA saw a lot less action this week, with only 9 matches or 18 maps played, and three teams yet to play a map, Liquid, OpTic and NRG.

But the opener was a gift for every CS:GO fan around the world. SK Gaming against our new Major Champs, Cloud9! It’s still tough to believe, but NA finally did it. What an incredible two weeks Skadaddy and his boys had in Boston. I still marvel at their epic title run and finals series against FaZe. That third map on inferno was the most tense game I have ever seen!

compLexity and Luminosity had a solid first week, both with 3W-2L-1OTL for a shared first place.

Rogue sits on a surprising third place with 3W-1L, against Splyce and Ghost, who themselves had the worst imaginable start with 0W-4L.

I think it’s safe to assume that the usual suspects C9, SK and Liquid are favored to make it to the LAN Finals in Dallas later in the season. OpTic will probably join them as well, due to individual skill alone, but the remaining spots will be highly contested, a prediction almost impossible.

Check out the full leaderboard below: 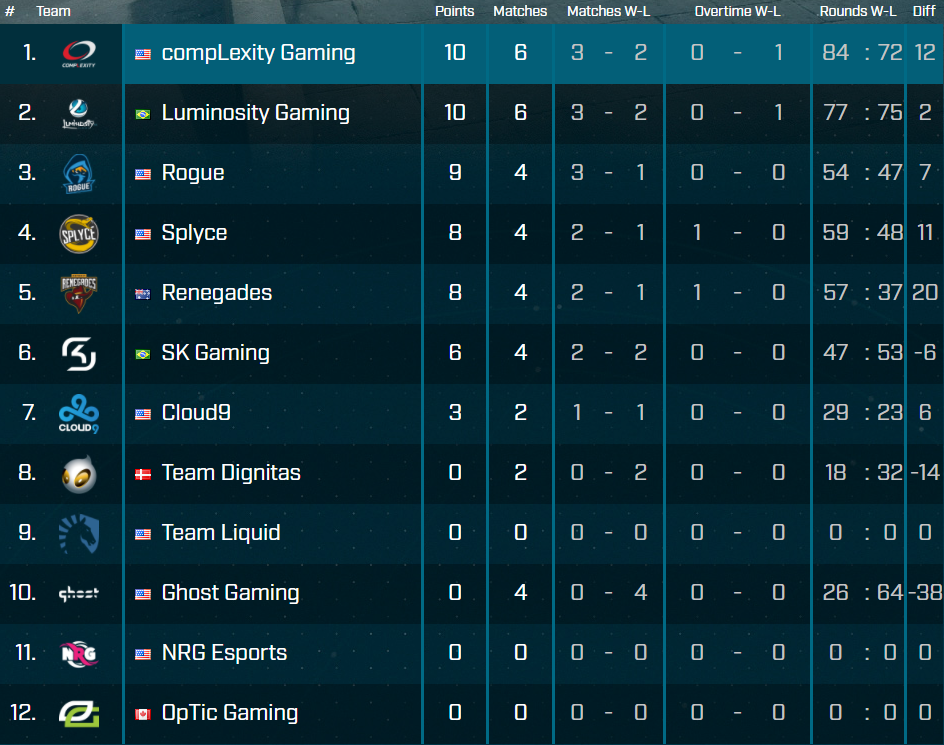 Match of The Week Recap – Cloud9 vs. SK Gaming

The last time these two teams met was in the semis of the Major. We all know how that ended. But the Brazilians were forced to use felps as a stand-in due to roster-lock rules. This doesn’t take away from C9’s victory of course, but as fans we love ourselves some ‘what if’. ‘What if’ SK two-zeroes C9 in this rematch with boltz? Well, then SK > C9, SK true Major Champs! Simple logic. Let’s see how it went.

First, the two met on inferno, the very map that C9 won in Boston against SK to advance to the finals. And this time again, Stewie & Co. got off to a good start, winning their terrorist half 8-7. Inferno is one of the most balanced maps out there, but the CTs are slightly favored. So C9 had good chances to close it out as Counter-Terrorist forces.

But the Brazilians showed a great team effort as they collected 9 Terrorist side rounds for a final standing of 16-13 in favour of SK. Four of FalleN’s boys were separated only by three frags, with coldzera leading the charge, and boltz lagging a bit behind.

Next up, de_train. A map that was SK’s domain not too long ago. But recently they have been rather shaky on it. Whereas C9 feel very much at home in between pop dog and ivey.

Cloud9 started out on the CT side and went up 3-0 after winning the pistol round. SK came back in the first gun round and tied the game 3-3, unfortunately the last rounds the Brazilians would win, before Cloud9 completely shut them down, ending the half 12-3. The deficit was too much to overcome for cold & Co. as the match ended 16-7 in favour of the Americans.

A MASSIVE ACE BY @FNS ON THE CZ! pic.twitter.com/PLUuU2l8ta

We’ll be back after a two week long break!

With StarSeries Season 4 and IEM Katowice happening, ESL Pro League Season 7 will take a break and return on the 6th of March with matches from both EU and NA.

As always, for all of the latest updates on the ESL Pro League, be sure to follow ESL Counter-Strike on Twitter and Facebook, as well as visit our How to Watch guide.