FaZe Clan join the list of potential Intel® Grand Slam winners alongside SK Gaming and G2 and the chance at a cash prize of US$1.000.000 after their victory at ESL One New York. To net the extra cash injection, FaZe now need to win 3 out of the following 9 tournaments included in the Grand Slam.

But, here’s the thing, FaZe didn’t just win in New York, they completely and utterly owned the opposition. Only once in seven maps played, they let an opponent reach double digits. And when your opponents are Virtus.Pro, Astralis, Cloud9 and Liquid, that’s pretty damn impressive. The European troop of superstars looks frightening, especially with olof and Guardian returning to form. FaZe are on a solid second rank in EPL as well and are looking to become the next world-beaters, a title previously held by SK and Astralis.

Team Liquid is the second team entering the fourth week of play with raised market value. In the past two weeks, stanislaw & Co. reached two grand finals (ESG Mykonos, ESL One New York) and beat top teams in BO3s (SK twice, Astralis). Have the US boys finally evolved from the tier-two waters and tentatively take their first steps on land among the elite level teams? After all, this wouldn’t be the first time an NA team performs well over the span of a few tournaments, just to then disappear into a deep, empty void again (remember C9, OpTic, Liquid?). This Liquid roster however certainly seems like they are here to stay. After bringing in Twistzz, the pieces fit just right, and hopefully they can regularly challenge and beat the big boys in the matches to come.

Here’s everything else you need to know for week four of ESL Pro League Season 6 before tonight’s matches start!

We’re approaching the halfway mark of the season and in Europe Fnatic are still in first rank with a record of 7W-1L. After losing both olofmeister and dennis, two of their former key players, this should come as a surprise to many. While this is a great result for flusha & Co., it may be skewed. The Swedes so far played some of the allegedly weaker opponents, and will face G2, FaZe, North and Astralis on the last four match days. This makes a top six placing far from secure.

BIG, who came into Pro League through MDL, climbed the ladder and now sit on the fourth spot, after winning all four maps they played in week three. After a disappointing event in New York, the Danes from Astralis find themselves in a bit of a slump both on- and offline, as they sit in sixth (5W-3L) in EPL. G2 are also playing a mediocre campaign with 4W-3L-1OTL, sitting in seventh place. After bringing Zeus back in, Na’Vi are still a major letdown. s1mple plays his heart out game after game, but his teammates just won’t follow suit. As a result the Ukrainians are last in the rankings with 2W-4L. 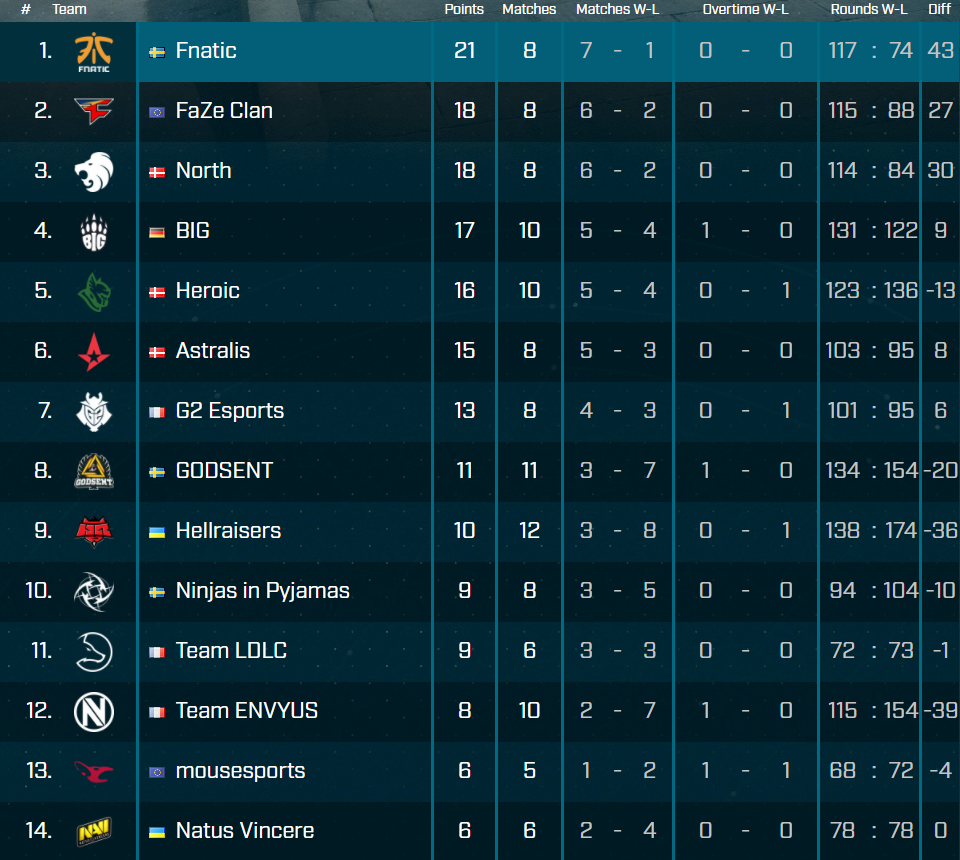 MATCH OF THE WEEK – Fnatic vs. mousesports

Both Fnatic and mouz underwent major roster changes coming into the sixth season of EPL and after three weeks of play, the situation they find themselves in, regarding the rankings, couldn’t be different.

The Swedes lead the league, and mouz are second to last. Just looking at the rankings doesn’t tell the whole story of the two teams however.

After bringing in STYKO and suNny, the German org. ramped up the firepower within their squad. Two weeks ago, the new roster managed to win their first tier-one LAN event, ESG Mykonos, beating high profile opponents on their way to the title. In EPL, chris J’s boys took maps off FaZe and G2. Mouz have only played five maps so far (1W-2L-1OTW-1OTL) and are far from chanceless in regards to a playoff berth.

Fnatic on the other hand faced some of the weaker opposition EPL has to offer. Their record of 7W-1L therefore doesn’t necessarily represent their true form.

Today’s match between the two will be a good indicator of where both stand. I’d favour mouz slightly over the Swedes to get the 2-0, though the more like outcome is one map to each squad.

Two welcome surprise guests in the upper echelon of the North American ESL Pro League are seang@res’ Misfits (8W-2L), and the band of European outcasts who now stir up the land of dreams, OpTic Gaming (8W-2L), ranked first and second, respectively. Especially Misftis weren’t expected to do so well after bringing in two relatively unknown French players, AmaNEk and devoduvek.

But most were sceptical of the revamped OpTic squad too. As it turns out, friberg leads his boys well on the imaginative battlegrounds and knows a thing or two about IGLing.

Cloud9 still have only six matches played, but a record of 2W-4L is already cause for concern. Wins are what counts, as everybody wants to see the new, so promising looking roster at the Finals in Odense.

And of course there’s the hubbub surrounding the Immortals, who are ranked 9th with 3W-4L-1OTL. kNg was released from the squad. As a result, HEN1 and lucas1 asked for permission to leave the team as well, and are now benched. This leaves the roster with steel, boltz, horvy and their coach zakk. At this moment it is still not revealed who the org. brings in as replacement for the three players. 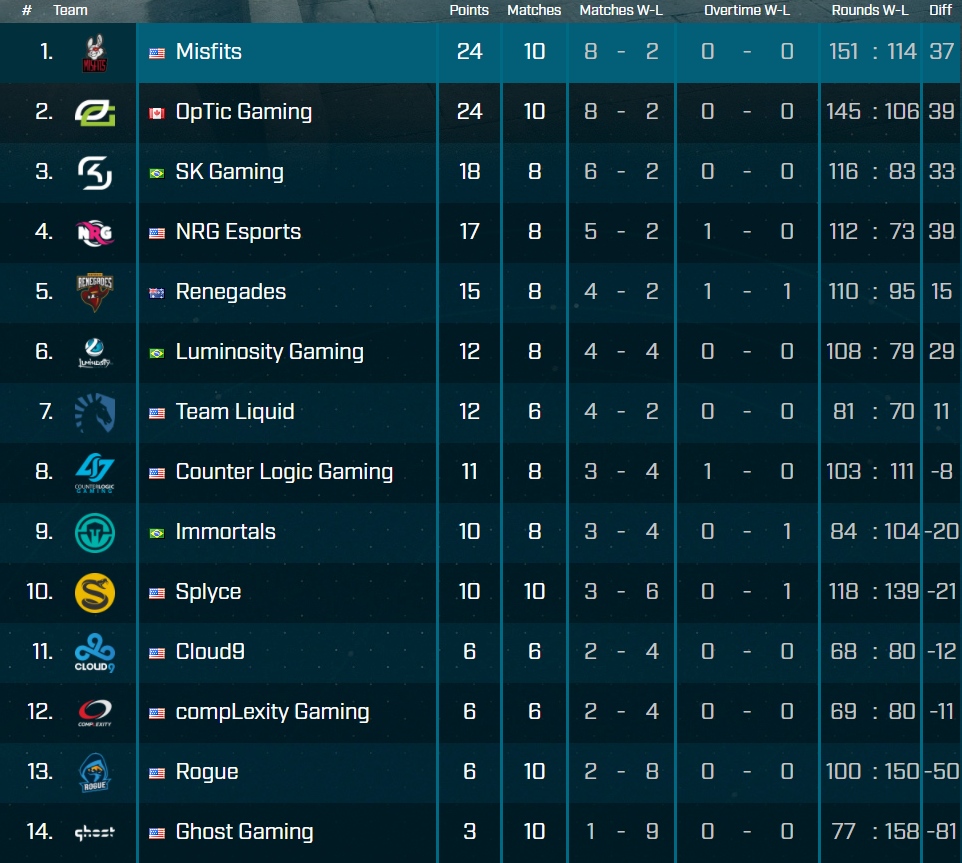 MATCH OF THE WEEK – OpTic Gaming vs. Renegades

The number two ranked team OpTic (8W-2L) clashes with Renegades (4W-1OTW-2L-1OTL), who sit on fifth. This is an intriguing match-up on many levels.

The individual skill on both teams is formidable. Renegades field three of the strongest players to ever come out of Australia, jks, azr and USTILO. Even though Renegades have so far avoided the toughest opposition, they have massively improved compared to last season. NAF and Nifty certainly make the difference, and it’s not by chance that azr’s boys have a chance at a top six placing and a ticket to Denmark.

OpTic Gaming is simply one of the most exciting teams to watch in the Counter-Strike world right now. In EPL the European mix team is taking care of business, even though friberg’s five also mostly played supposedly weaker teams, which makes it difficult to predict what they are capable of when the likes of coldzera and ELiGE join the server... Everybody wants to see them do well and reach the finals in Odense. Magisk and Co. will be favored going into the match against the Renegades, and looking at who they still play in the remainder of the season (SK, C9, Liquid), six points here would help tremendously to clinch a playoff ticket.

Tune into the ESL CS:GO YouTube channel tonight to watch your favorite teams battle for a spot in the offline finals in Denmark, Odense. If you want to watch the season finals, you can purchase tickets here.