Philipp Saedler
Senior Editor
Share this article:
Tweet
In one week, the Worlds kick off with the group stage. As it all kicks off on Thursday the 18th of September, ESL Fantasy is here to give you another chance to show your League of Legends expertise on the biggest stage possible. Can you pick the right players to earn your team the throne?

How to assemble your team

Signing up and setting up your team is incredibly simple, and although you can still join the action once the season has started, those who participate from the start will have an obvious advantage as they can collect points right from the very first match.

Signing up is easy, with you able to use your existing ESL account or sign in with Facebook, Google+ or Twitter, whichever you prefer. Then all you need to do name your team, click “Join League” and you’re all set and ready to start picking your players.

So what are you waiting for? Head over to fantasy.eslgaming.com to start putting together your team now!

As the system for Worlds is somewhat different, you will be able to pick players for the individual stages. For the first week, when groups A and B are played, you will be able to pick up players from those teams, while for the second with groups C and D you will get to choose from their player pool respectively. As you might lose some money on the way to the playoffs, we decided to add another $500 to every ESL Fantasy manager’s account for the final stage, meaning everyone should be able to pick up some superstars for the grand finale.

The point system is the same as it was during the LCS Summer Split: 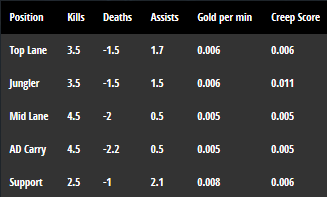 For those who didn’t take part in the ESL Fantasy LCS Summer Split, the game is easy to understand, with managers getting a starting budget of $5,500 which you use to set up a regular five-role League of Legends team. While you will be able to invest a lot of money into buying superstars from the start, keep in mind that you need to fill your roster to be able to score on all five positions.

We are looking forward to seeing a lot of managers both old and new fight to become the ESL Fantasy Worlds champion, so sign up now and put your League of Legends knowledge to the test! Also make sure you head over to lolesports.com on Thursday the 18th of September to watch the action!
Share this article: