Sven Van Herck
Editor
Share this article:
Tweet
Major upsets took place yesterday when Team WE took down the absolute favorites to win this year’s Intel Extreme Masters World Championship in a 2-1 victory. WE suddenly found itself in the grand final against all expectations and with Team SoloMid as their opponent. It was anybody’s guess who would take this series since no Korean teams remained. Let’s take a look at the results!

BANS PICKS
The game started of slowly for the first ten minutes and the first action we saw was Team WE’s Mystic with a blue steal with his ult! Shortly after we finally saw first blood, which went to TSM after a great Annie stun by Lustboy. TSM then followed up with a first dragon for TSM, reducing the amount of gold Wildturtle was behind after losing in CS.

Later in the game, a gank in mid ended with a dead Bjergsen and Team WE picked up a crucial mid turret. A kill in top on Dyrus then resulted in a bot lane tower for TSM after which Turtle rotated there to get that turret as well. The next few teamfights went in favor of Team WE, resulting in a 4/0/1 Ahri by 20 minutes. TSM decided to wait for WE in a bush however and a beautiful flash Tibbers resulted in a 3-0 teamfight and a dragon! After a quiet couple of minutes WE used the Sion ult to engage on TSM and picked up two kills and a Baron because of it. A try to replicate the previous result and another Sion engage with the Baron buff resulted in a 3-0 teamfight and a TSM that is 6k behind.

TSM didn’t give up and managed to win  a 4-0 teamfight and a picked up a Baron buff as a result! TSM then took down a mid tower while superminions pushed into their base but they cleaned up without losing nexus turrets and went looking for another teamfight. They found it and won once more without losing anyone. They took down the first inhibitor of the game and shortly after an ace came in thanks to amazing plays from TSM Bjergsen and Lustboy! TSM take the first game! 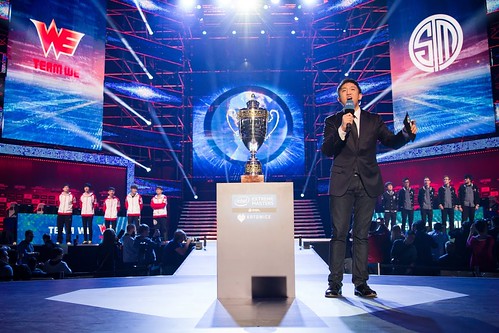 BANS PICKS Dyrus got caught out in an early game skirmish but flashed away into the baron pit forcing Team WE to follow if they wanted the kill. They got baited however, giving up two kills in return for one on Dyrus. After that, TSM traded 1 for 1 in the bottom lane and after five minutes there were 5 kills on the board. A double teleport bottom ended up in 2 more kills for Team WE, resulting in a small gold lead for Team WE at 7 minutes. TSM focuses on objectives after that and gets kills alongside of them, racking up a 3500 gold lead. TSM then managed to kill 4 members of Team WE, pushing the game even more into their favor and eventually snowballing to a victory for TSM!

BANS PICKS First blood came in early for TSM as well as their first tower, resulting in an early gold lead. More kills came in right after and Team SoloMid seemed absolutely in control all over the map. By 15 minutes TSM already had a 8.5k gold lead and seemed to snowball out of control. A desperation play by WE got them a few kills but even with the element of surprise in that teamfight, WE simply couldn’t put out the damage needed. A second attempt by Team WE results in the Ace for TSM, the baron and shortly after another ace and finally the game for Team SoloMid! TSM are the Intel Extreme Masters World Champions! 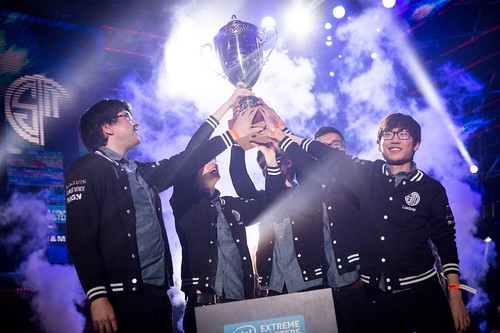 We hope you enjoyed all the esports action this weekend! Make sure to check out the vods on our YouTube channel if you missed any of them! Additionally, keep an eye on our Flickr account for photos of the event.
Share this article: