Past Pro League Season the cut-off for making it to the playoffs or having to watch from home, was 42 points in both NA and EU.

Currently, Fnatic sit atop the European leaderboard with 41 points and six matches remaining, which puts them in a very comfortable position regarding the qualification. In theory, one more win in their remaining encounters with North, FaZe and G2, should suffice to send them to Denmark.

On the other end of the standings, we find Na’Vi, GODSENT and EnVyUs, with extremely slim chances of reaching Odense.

In North America, two teams have already passed that 42-point mark: OpTic Gaming (45p) and SK Gaming (43p). Splyce, compLexity, Rogue and Ghost Gaming sit on the bottom, and are no longer participating in the playoff-race. Avoiding relegation is what counts for them.

For literally every other team in both regions, the finals-dream is still very much alive. Action and tension in these final two weeks of ESL’s sixth Pro League season are guaranteed.

Let’s get a closer look at both regions.

We have to talk about our last season’s champs, G2. shox’s boys currently sit on the 11th rank with a record of 6W-1OTW-7L-2OTL, and run the risk of missing out on the finals.

On their remaining 10 maps against Heroic, BIG, GODSENT, Hellraisers and Fnatic, the French can't afford more than 3 losses. It’s possible, but intricate. Can kennyS & Co. make it two miracles in as many seasons?

Astralis, FaZe and North, ranked second, third and fourth respectively, seem primed to make it to Odense, alongside Fnatic.

mouz and NiP occupy ranks five and six for now, but there’s a whole array of teams fighting for these spots as well: Hellraisers, Heroic, G2, LDLC and BIG, who both came into Pro League through the Mountain Dew League (MDL).

Take a look at the full table of ESL Pro League Season 6 Europe below: 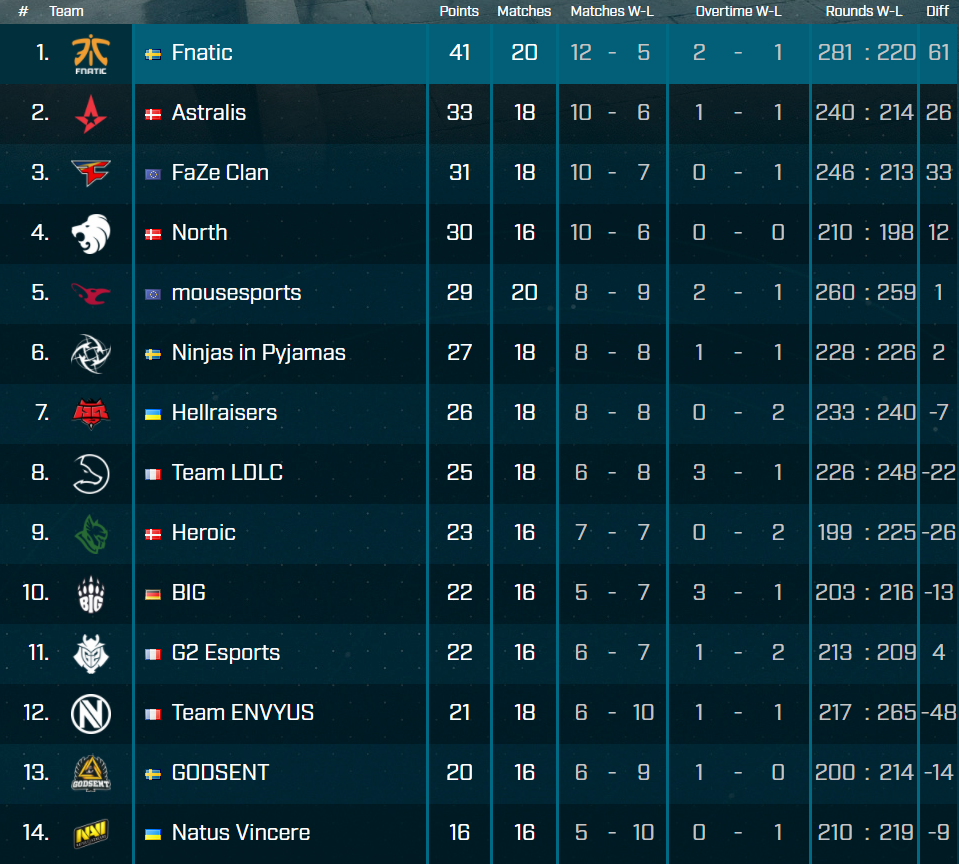 Both teams had a busy and, to be honest, mediocre week at best. FaZe lost five out of the eight maps they played against North, Hellraisers, Astralis and Heroic, but at least managed to stay on the third rank.

North dropped both maps against fellow Danes from Astralis and went 1-1 versus FaZe, sliding down from rank two to four. k0nfig & Co. are still in an excellent position to make it to the finals in their home country though. Against Na’Vi, LDLC and BIG, North should be able to claim the remaining points they need to clinch that playoff berth.

The two powerhouses first met on mirage and, on the back of another insane individual performance by k0nfig, who dropped 31 frags, the Danes took down FaZe 16-12. North rely heavily on k0nfig’s and valde’s performances these days, which makes them prone to inconsistency, a feature they ought to eradicate if they want to be competitive even when these two individuals have off days.

The teams then switched to de_inferno, and FaZe let North know who’s boss is on the map. rain, who is on fire these days, finished with a rating of 1.91, 121 ADR and 23 frags in a 16-4 thrashing of North.

When all the pieces fall into place, FaZe is unstoppable. They have won 15 straight maps offline, and each one of their star players can single-handedly take over a game. Even karrigan finds his way to the top of the scoreboard frequently, which should just be illegal as the IGL in a team with olof, NiKo, rain and Guardian.

Get ready them bodyy bags

Too ez a clutch for the clutch master Xyp9x

It hurts to say this, but NA is under strict command of two non-US teams, OpTic (15W-5L) and SK (14W-5L-1OTL), who are ranked first and second respectively, and it isn’t even close.

It’s time for the region, which has been under Brazilian leadership for quite some time now, to step up and claim what is rightfully theirs.

Cloud9 (8W-1OTW-7L) come in at the eighth spot and Renegades (7W-2OTW-8L-1OTL) have plummeted drastically after an incredible start into the season, and now find themselves sitting on the tenth spot.

Check out the full standings for North America’s ESL Pro League Season 6 below: 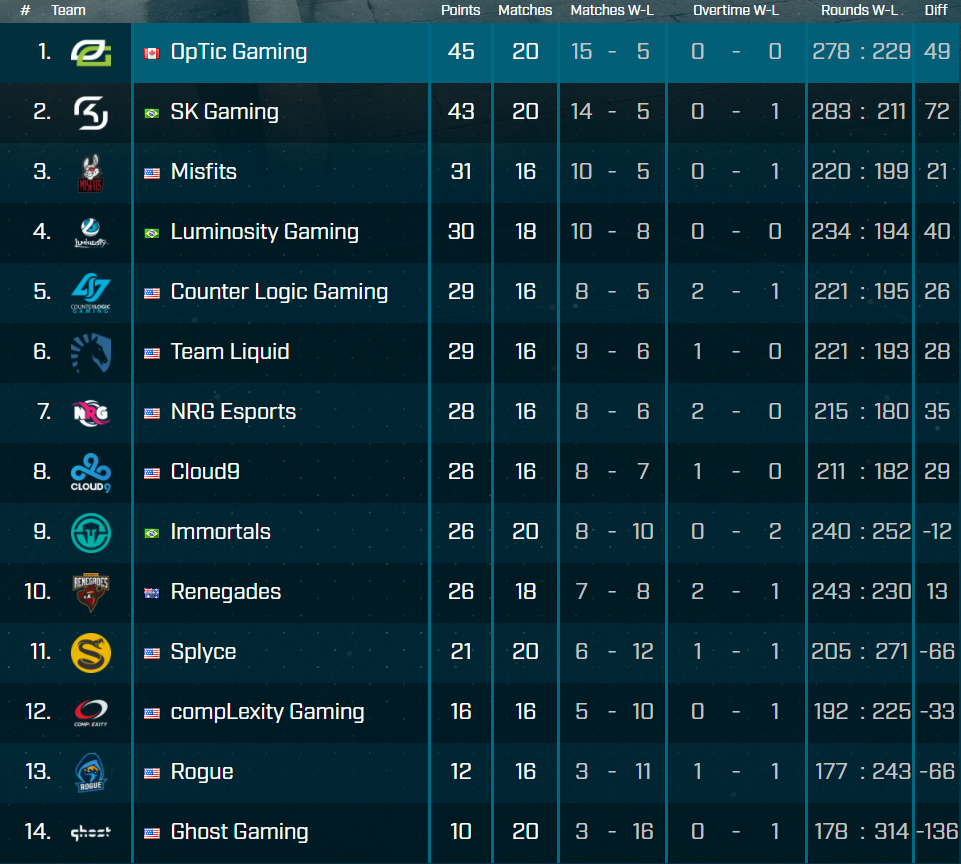 An old NA classic was in store for us this past week when C9 and SK once again duked it out.

The teams first met on cbble, a historically strong map for the Brazilians. Starting on the T-side, FalleN’s team racked up 13 rounds to two from C9, sealing the deal in the first half. But kudos to stewie2k & Co. for showing spirit when it was their time to wield the AK and plant the bomb. C9 eventually lost 16-11, but showed heart in their comeback attempt.

Mirage was up next, a strong map for both teams. Unfortunately, autimatic was plagued by internet problems and valens had to play in his stead. This was too big of a disadvantage to overcome for C9 and the second map too went the way of the Brazilians with 16-9.

These two losses leave tarik and his boys in a complicated situation. They still have to face Renegades, compLexity, Liquid, OpTic and Misfits, anything but an easy task! Everybody knows they have what it takes to still make it to the finals in Odense, but it’s time to prove it.

We’ll be back tomorrow with more ESL Pro League action!

Tune in to ESL’s CS:GO YouTube channel to watch your favorite teams battle for a spot in the offline finals in Denmark, Odense as teams enter the final two weeks of ESL Pro League season 6. Make sure to reserve plenty of time for all the high-pressure matches happening across both regions. If you want to watch the season finals, you can purchase tickets here.