Only one more month until the ESL Pro League Season 6 LAN Finals in Odense. Both EU and NA will send their six best teams to Denmark to determine which region reigns supreme. G2 brought the crown back to Europe past season after two NA triumphs. This gives EU a 3:2 lead over NA in the battle of continents (of course!).

The current standings promise an epic battle next month, as it’s likely that ten of the world’s best twelve teams take the trip to Denmark.

Is EU going to pull clear and extend the lead, or will NA equalize the score?

Get a closer look.

As it’s been the case for most of the season, Fnatic and FaZe share the league lead with 43 points each. The latter hold the first spot due to a better round-loss differential however. The two Danish powerhouses North (38p) and Astralis (36p) follow on ranks three and four, while the Ninjas in Pyjamas (35p) sit on the fifth spot.

Now this is where it gets interesting, the sixth and final spot to secure the playoff ticket. Currently G2 (31p) hold that spot, but LDLC (31), Hellraisers (29p) and mousesports (29p) are all within reach, only one match victory away from closing the gap.

Na’Vi (21p) have settled in the cellar of the table. They look like a lock for relegation. The Ukrainian squad has shown bad performances all season long with no signs of improvement. seized stepped down from active duty and will most likely get replaced by electronic. But from an outsider’s perspective it seems s1mple & Co. have put this season to rest.

For BIG (25p) and ENVYUS (24p), ranked 12 and 13 respectively, it’s all about avoiding relegation matches against the number two and three ranked teams from MDL.

Check out the full table of ESL Pro League Season 6 Europe below: 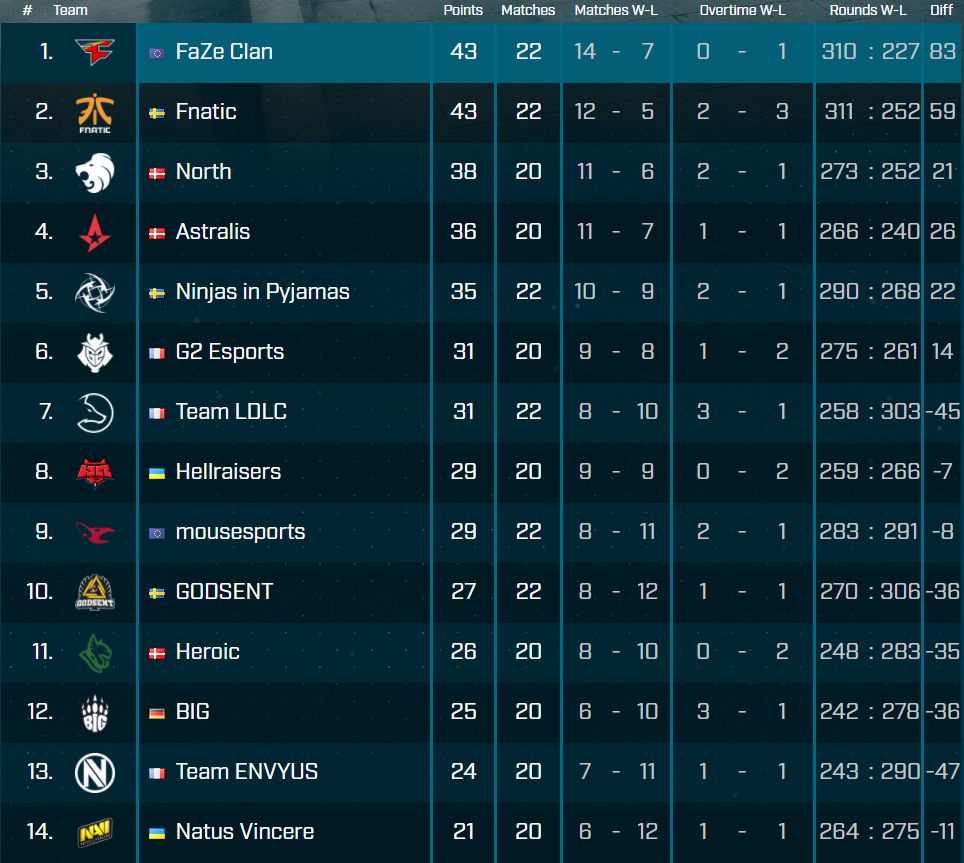 Match Of The Week Recap – G2 vs. Heroic

G2 found themselves in dire straits before their game against Heroic past playing week. The season five champs desperately needed to take home both maps to keep their dreams of a repeat alive. I thought with all the experience in exactly those tough spots, the French side would come through in the end and collect all six points.

First up was de_inferno, where G2 put on a brutal CT half, which ended 13-2 in their favour. Kudos to Heroic for fighting back however. Those large half time leads are sometimes the most difficult ones to close out, and the Danes clawed their way back to 15-10, before eventually succumbing to the super team.

Next up, de_nuke. A map kennyS has been an incredibly dominating force on this year. This time was no different, and his team needed him to be, as the match went all the way down the wire. At 15-14 for G2 it was kennyS who sealed the deal. Much needed six points for the Frenchmen to leap to the sixth spot in the rankings.

.@G2kennyS closes out Nuke in style! Great attempt by @heroicgg trying to force OT but it was simply not enough. 16-14 GG!#ESLProLeague pic.twitter.com/zByfdbuedt

SK (55p) is the first definite team from NA to make it to Denmark, as they can no longer drop out of the qualification zone. OpTic (48p), CLG (42) and Liquid (42p) will also represent NA in Odense. While it’s mathematically still possible for each of them to drop out of the top six, it’s well-nigh impossible to come up with a scenario where that happens.

Behind the leading four, it gets a bit uncomfortable. Another quartet fights for the remaining two LAN spots. Cloud9 (35p) has finally squeezed into a playoff spot, sitting on fifth, and Luminosity (32p) occupy the sixth rank. But Misfits (32p) and NRG (32p) on ranks seven and eight are only three points behind with all to play for still. Especially the Misfits have proven over the weekend how strong they have become under seang@res leadership by making it to the Major qualifier.

Rogue (15p) and Ghost Gaming (10p) occupy the last two spots and will probably bid goodbye to EPL after this season. 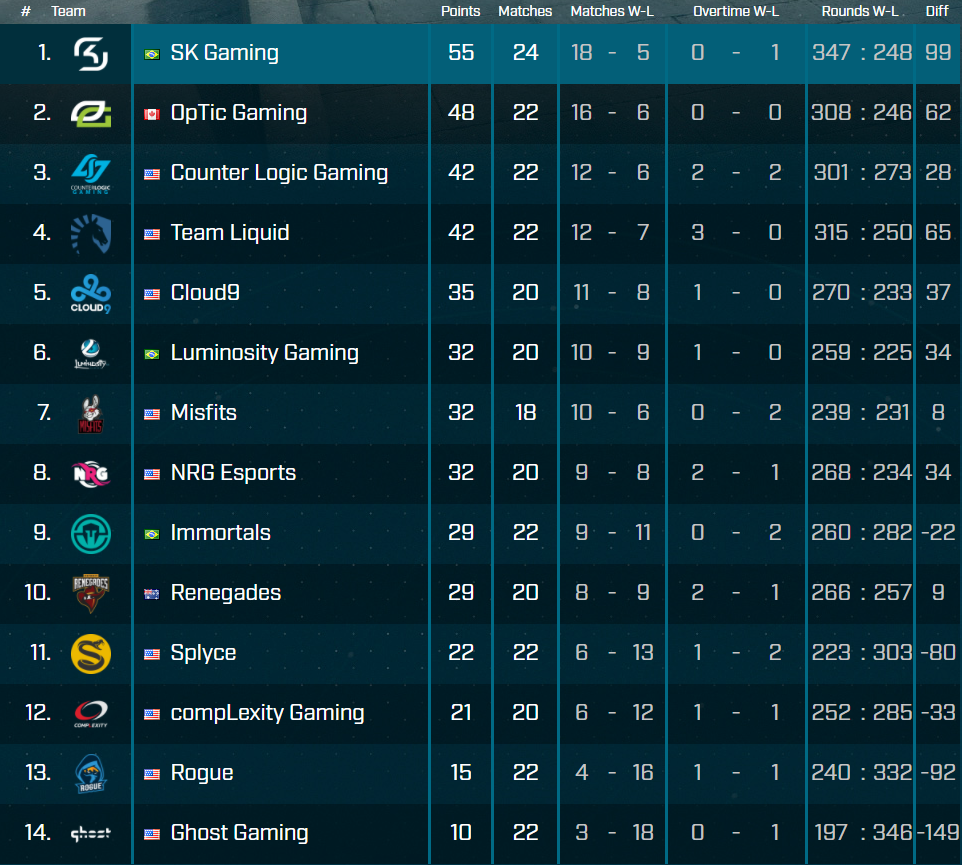 Match Of The Week Recap – CLG vs. Luminosity

What a match! The two ended up splitting the series after playing a total of 73 rounds across both maps. First up was de_cbble, which went the way of the Americans with 16-9. They lead 8-7 after a close first have and then ran away with it on the CT side with 8 round to two. Once again, nahtE top-fragged for his team. The youngster might be the biggest revelation in NA of this season.

Next up, de_cache. Certainly a contender for match of the season. At the score of 15-7 for the Americans it already seemed all but over. But the Brazilian fighting spirit came through and Luminosity clawed their way back to even at the score at 15-15, sending us into overtime. Not one, not two, not three, but four overtimes were needed to determine the winner, Luminosity.

Check out chelo clutching a 1v2 in the final round of the match.

What a nailbiter! @chelok1ng closes it out with a 1vs2 and @Luminosity wins it 25-23! @clgaming and Luminosity trade 1-1, GG!#ESLProLeague pic.twitter.com/BD6pP4EYwg

Highlights Of The Week

Guess who without reading!

We’ll be back tomorrow for the final week of ESL Pro League Season 6!

Tune in to ESL’s CS:GO YouTube channel to watch your favorite teams battle for a spot in the offline finals in Denmark. Make sure to reserve plenty of time for all the high-pressure matches happening across both regions. If you want to watch the season finals, you can purchase tickets here.