Sven Van Herck
Editor
Share this article:
Tweet
0 total shares
Team WE competes in the Chinese LPL, attended the Intel Extreme Masters World Championship in Katowice last year and won Intel Extreme Masters Shenzhen this year. We took the time to sit down with manager Zhenyao “Angelxi” Wang and asked him about the team’s hopes and expectations for the tournament.

ESL: Hello and welcome - thank you for taking the time to speak to us. For those of us who don’t follow LPL, can you tell us more about how the season has worked out for the team so far?
Zhenyao “Angelxi” Wang: We had a roster swap happen in December where both Styz and Spirit joined the team. This resulted in a new ADC and jungler, and because of that our team play still requires some work to make it ideal.

ESL: LPL got even more stacked for 2015, with a lot of Koreans taking spots on LPL teams. What do you think of this move? Do you think it’s good for LPL?
Angelxi: South Korean players joining the LPL is definitely a good thing. It has helped increase quality of play in the Chinese region and has brought things to a new level.

ESL: You recently picked up two Korean players yourself. Spirit made a name for himself at Worlds 2014, but little is known about Ninja. Can you give us some insight into these two pickups?
Angelxi: Spirit is one of the best junglers in the world and it has been a pleasure to have him join Team WE. Ninja joined us last season and he has adapted very well to the life of a Chinese pro player. He’s even able to speak quite a bit of Chinese so he’s been a very good addition to our team.

ESL: You played at Katowice last year as well but didn’t manage to make it out of the groups. What do you have planned so that this doesn’t happen this year?
Angelxi: We will definitely be more ready for the possible matchups this year. We are studying our opponents and their habits and have taken the time to adapt to this version of the game. 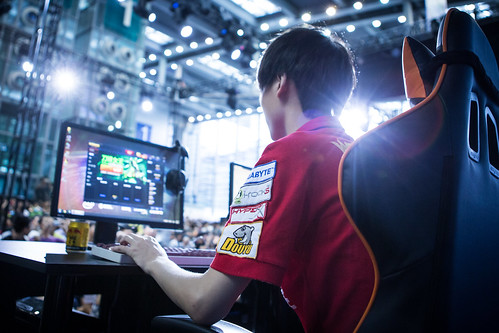 ESL: Different metas are often played in different regions - where do you think the strength of the Chinese meta lies?
Angelxi: We think that the current Season 5 meta gives the LPL region a stronger level of competitiveness than before.

ESL: Are you looking forward to playing in Europe once more? It must be quite different from playing in China.
Angelxi: Of course we are! We are very much looking forward to meeting all the teams and players from different regions and countries. If we could win the Intel Extreme Masters World Championship, that would be amazing!

ESL: What do you expect from the European and North American teams and how difficult is it to prepare against their different playstyles?
Angelxi: Different regions have different styles and there are so many different ways of playing League of Legends. We prefer to stick to our own style and enjoy it.

ESL: That said, are there any teams you’d love to play against or any teams you’d rather avoid?
Angelxi: Probably the Korean teams - they won both Season 3 and Season 4 and everybody knows how hard it is to beat them.

ESL: Thank you very much for your time. The final words are yours!
Angelxi: Thank you Intel Extreme Masters and thank you Polish League of Legends fans for having us - we’ll see you next month!

Remember that tickets for the World Championship are still available on our site - get yours now and be part of the biggest Intel Extreme Masters event of the year!