Kevin Tocao
Contributing Editor
Share this article:
Tweet
Arguably the most well-known duo in European Dota, paS and FATA- have played together since 2012. Now the two Germans are back under the mousesports banner looking to win the ESL One Championship in their home country.

Since late 2012, Adrian “FATA-” Trinks and Pascal “paS” Lohmeier have played on four different teams together. While roster changes aren’t rare in Dota, paS and FATA- are some of the only players that seem to come as a package no matter what team they join. Now the two have found themselves back under the German banner of mousesports with a roster that has impressed Dota fans around the world despite only having played together for just over two months.

After qualifying through a nail-biting series against Team Empire, they are heading to Frankfurt with something to prove against the best teams in the world. We spoke to paS and FATA- about what has kept them together all this time and how the team has been adjusting to each other and their new sponsor.

ESL: You both began playing professionally on the same team in late 2012. You both then joined DD.dota which became Sigma.int and then left for Team Dog/mousesports. Could you give us some background on how you two first met and why you decided to stick together throughout all the teams you’ve joined?
paS: Fata and I met first at Gamescom 2012. There we played in different teams and had really close games. Based on our performance, Kuroky asked us later that year if we were interested in joining his team. We decided to stick together because we always have a lot of fun when we play and have the same mindset about Dota.
FATA-: We initially joined Team Zero together with Kuroky, Alex- and Black^ as existing members. This team was then signed by mousesports. In this whole period I always felt like I had a good connection to paS, inside the game as well as outside of it.

ESL: As I mentioned, you both have played under the mouz banner before. Did your past with mouz play a role in their picking up Team Dog?
paS: Our experience with mousesports was the deciding factor. We had a lot of different offers but chose mouz because we know they are a reliable organization.

ESL: Considering that the team is only two months old, you have had some great success in a short amount of time. Did you expect this when joining Team Dog? Do you feel that the team can keep up this momentum through The International?
FATA-: We initially joined this team with the intention to do well in the starting period as well as over a longer period. After talking to Pajkatt and MiSeRy prior to the formation of Team Dog, I realized that we all have a very similar mentality about the game and are ready to work hard for our success. 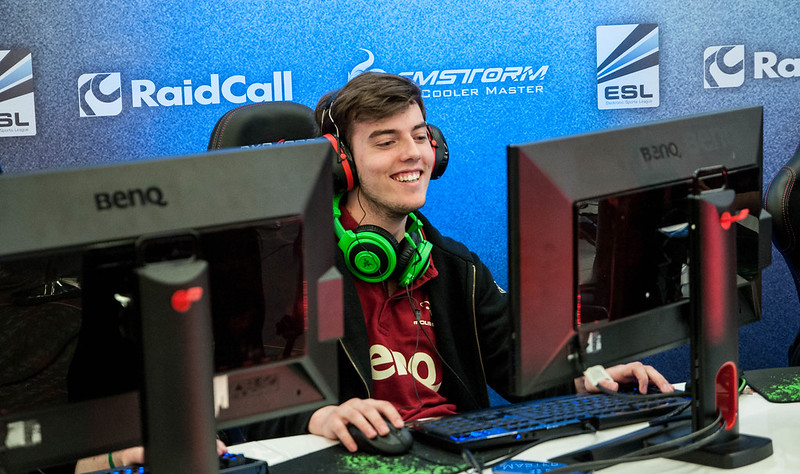 FATA- at Raidcall EMS One

ESL: Mousesports may have one of the most internationally diverse rosters in all of eSports, both in nationality as well as playing experience. Do you two think the combination of Pajkatt and MiSeRy’s experience in China, MSS’s rise through American Dota as well as you guys’ time in some of the top European teams have given mouz a unique understanding of Dota?
paS: We definitely have our own way to play Dota. We play a lot more aggressive than most teams. This often leads to overextension in our gameplay but we work hard to stop these mistakes.

ESL: On the other hand, does the fact that you all come from four different countries complicate anything?
paS: It does not complicate anything. Everyone has played in international teams before and we have a really good atmosphere in the team.
FATA-: I don't think coming from different countries is ever a negative thing. Granted, there are no language barriers [within the team] and people are ready to maintain a good team atmosphere.

ESL: What are your goals for ESL One and for TI4? How is mouz going to prepare for these upcoming LANs?
FATA-: We will try our best at every tournament we attend. Be it ESL or TI4, we will work towards top placements. If we are not successful at ESL One, we will try to learn from our mistakes and be stronger in the next tournaments. Therefore, we will have a bootcamp after ESL [in Frankfurt] where we will be able to analyze previous games and work towards the future.

paS (second from right) and FATA- (far right) with Sigma.int

ESL: You guys just came off a fourth place finish at DreamHack, behind Empire, Cloud 9 and Alliance. Were you happy with your performance? What did you guys take away from your first LAN as a team - will you guys need to adjust anything moving forward?
paS: We were happy with our performance on the first day and it was awesome to see that we can perform well on LAN. The losses against Cloud 9 and especially Empire were really disappointing. We did not play our game. It felt like we were not prepared enough.
FATA-: Even though the placement at DreamHack could have been better, I still think we learned a lot there. It was nice seeing that even when we lost people were not extremely frustrated but rather immediately looked for the reasons that led to the losses so they don't occur again.

It is also important to note that paS and FATA are not the only long-time teammates and friends on the team - both Pajkatt and MiSeRy have been playing competitively together since the original Dota. And, although the team itself is relatively young, they have plenty of experience and even more to prove. Tune in to the ESL One finals on June the 28th to see mouz take on Invictus Gaming in the first game of the tournament.
Images courtesy of:
Share this article: