With balloon artist Daniel "FuDD" Ravia now having twisted at ESL events with Dota 2, League of Legends and Counter-Strike: Global Offensive as headliners, he’s entertained fans of some of the esports scene’s biggest titles. Now that he’s made his way to the SAP Center for Intel Extreme Masters San Jose 2015 and back with fellow balloon artist Sean Rogers a couple of weeks ago, we sat down and chatted with Daniel to find out how he found the event, the fans and the all-important balloon twisting.

ESL: Hi again, Daniel! So how did you find Intel Extreme Masters San Jose compared with the other ESL events you’ve been to?
Daniel "FuDD" Ravia: It was, once again, an amazing and wonderful experience. Staff, crew, attendees - everything was spot on and we were taken care of very well! 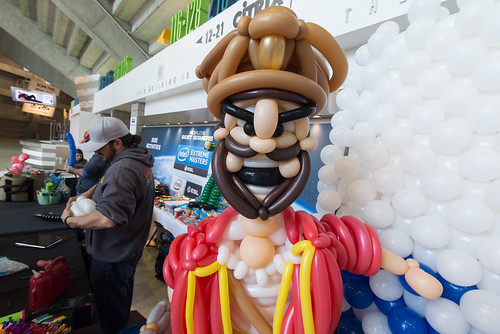 ESL: What was it like getting ready for the event to start at the SAP Center?
Daniel: Getting ready was 12+ hours of twisting and creating onsite and at the hotel after the venue was closed. A tornado of bags of balloons and inflated balloons!

ESL: How were the fans in San Jose?
Daniel: The fans not only were super friendly and willing to brave the line but gave us some of the widest ranges of things to make, which was great! Gaming fans are the best people in the world, and gamers too! Other than balloon fans, of course :)

ESL: Favorite balloon sculpture from this event?
Daniel: I had quite a few balloons that I really loved the way they turned out. My top favorite was Shaco, and I also loved being able to create the wall.

A photo posted by Daniel Ravia (@balloonmanfudd) on

The wall was something we decided to throw in - we had never designed something like it. The whole time we actually were very worried that it would not turn out as each balloon had a specific space to fill in the pattern. But we nailed it! Looking at the wall with the naked eye, it was hard to read the words and logo, but when viewed through a lens or camera the words sharpen into focus - it was quite a neat effect and something completely unintentional. We also utilized LED lights in some sculptures, helping to bring Thresh lanterns to life among other glowing-eyed beasts.

ESL: Were there any sculptures that particularly challenged your balloon twisting skills?
Daniel: So many... Each balloon presents challenges, with the exception being one or two things that I have made before (Yoshis, Pokemon, etc.). With weapons from League, it tended to be surprisingly difficult to be able to really convey the feel of the weapon. Seeing the smile afterwards was worth it, though! 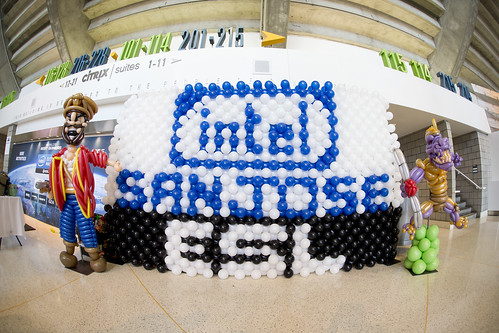 ESL: How many balloons do you think you used this time (and how many sculptures did you manage to turn them into?)?
Daniel: You always ask the hard questions, haha. Not Including the wall and the two large League of Legends sculptures, I'd estimate me alone around 2,500 to 3,000.  With the wall, the large sculptures and Sean's balloons, 7,000 to 8,500.

ESL: Were you cheering for any particular team (or teams)?
Daniel: Team Liquid every day, no matter the game! I actually even got a chance to see a bit of the winning speech from day one.

ESL: Now that you’ve twisted balloons for Dota 2, CS:GO and League of Legends, do you have a clear favorite?
Daniel: Honestly, I love doing LoL and Dota 2 balloons just for the variety. There are so many characters, weapons, couriers, etc. that it just never gets repetitive and is always challenging, which is so much fun.

A photo posted by Daniel Ravia (@balloonmanfudd) on

ESL: This time you had Sean helping you out - did another pair of hands help the balloon twisting operation run more smoothly?
Daniel: Having Sean was amazing. He did such a great job and brought so much to the table. Being able to take a break to eat or use the facilities was priceless. He designed the wall that we built to show off other options with balloons. I hope to have Sean be with me as much as possible in the future as well as creating the potential for a team who can not only provide amazing twisted creations but amazing decor... With a great team, I hope to create balloon art that will melt people's minds!

ESL: What did you get up to when you weren’t twisting balloons?
Daniel: Not much, haha. We had great food for lunch and dinner at the venue . Friday to Sunday were 12 or more hours each day of playing and creating with balloons. Your body is quite literally beat after finishing, though we did manage to get some food in town after Saturday and Sunday and a couple beers! Mostly we just reflected on how awesome this is, how much each part of our bodies hurt and how we can improve the next time! ;) 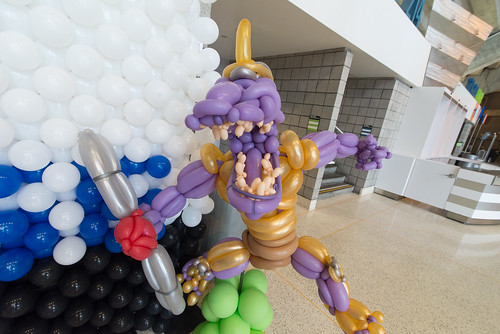 ESL: Thanks for chatting with us again, Daniel! Any shoutouts?
Daniel: So many people to thank. Sasha and Joscha are so great and they took care of us with smiles - thank you so much. Anna and Chrystina - you girls rock! My Team Liquid fam. Kennigit for getting me here in the beginning, lilsusie, itsjustatank, Pachi for saying hi and running errands and so many crew that it's hard to remember names - they all were smiles and helpful and amazing. AND THE FANS! You all make this dream of mine all the sweeter! Thank you, ESL!