One of the main attractions of ESL One Frankfurt - aside from the thrilling matches between some of the world’s best teams - is the cosplay competition, which provides the opportunity for lots of incredibly talented people to show off their crafting skills and enrich the entire event.

Last year, Roman “TanakhT” Pivec awed everyone with his outstanding Timbersaw cosplay and took first place in the competition. This year, he is returning to Frankfurt with a brand new costume. Here we chat with him about ESL One Frankfurt, cosplaying and more ahead of the upcoming event.

ESL: Hi there, TanakhT - great chatting to you again! What have you been up to since last year’s ESL One Frankfurt?
TanakhT: Hello! Well, I had a really great year - I made a new Timbersaw set and I made Sven for the Frankfurt Major. Frankfurt is just such a nice city I had to be there twice!

ESL: Last year, you awed everyone with your Timbersaw cosplay and took first place in the cosplay competition. What were the best reactions to your costume and how did they make you feel?
TanakhT: It felt completely different to what I am used to. At most conventions not everyone recognizes Dota, but at ESL One where everybody knew who I am it was just amazing. I was so overwhelmed with the reactions - at one point I was standing in the middle of circle of people who wanted to take a picture with me. I was standing there for good hour. 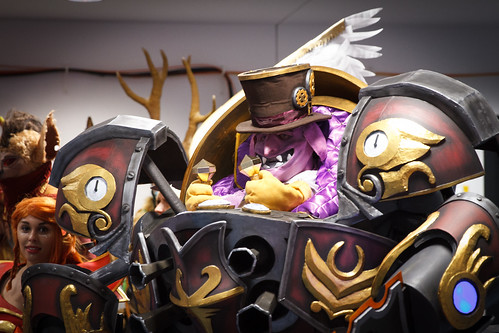 ESL: What went through your head when you realized that you won the competition and got to go on stage to claim the main prize?
TanakhT: I had no idea I’d won until I was the last person standing under the stage - then it hit me and I felt an adrenaline rush so I don’t really remember what happened when I climbed that stage. I mean, all of the contestants were so good and deserved the win - I was only the lucky one so it felt really awesome.

ESL: How difficult was it to walk around the venue in such a complex costume? Did it take any damage during the event?
TanakhT: Once I was outside, it was easy. Getting out of backstage was quite complicated but the stairs were really wide. I made the costume as flexible as I could so it was really fun walking around. No damage as far as I know during the event, but it took some hits on the way home.

ESL: Were there any cosplays that stood out for you at the event?
TanakhT: All of them! Seriously! Shendelzare? For real? The best Venge set, Enchantress, Legion, beautiful Maidens and Linas, QoPs and Windrangers! I can’t really pick one or two - I loved them all!

ESL: What is your favorite memory from ESL One Frankfurt 2015?
TanakhT: My favorite memory goes back down to backstage. Right after I went offstage, there was Team Secret playing after us. I was in the costume, walking through the corridor and I saw Puppey. I wanted a picture with him but I didn’t have my phone on me, of course, so I asked my friends to get it but it took quite a long time. All of the members of Secret were gone but Puppey stood there waiting for me. Some guy made a joke like: “Yeah, who would want to win a tournament if you could take a picture with Timbersaw?” We took a picture and I am so happy for it!

ESL: You also attended Road to BlizzCon in Prague as Annoy-o-Tron and the Frankfurt Major as Sven - tell us more about these costumes.
TanakhT: Oh, you are well informed! Prague is my hometown so there was no way I wouldn’t go there and the contest looked good. Blizzard has some really serious games but it wouldn’t be me to do something ‘regular’. I made Annoy-o-Tron to entertain people - it had an air horn, huge bell, megaphone instead of a nose and even functional light beacons. It was a 30-day project and I liked the outcome. People went crazy when I played “Hello! Hello! Hello!” very loudly. And for the Majors, I had Sven. I made him because one of my good friends Kata was going with her Crystal Maiden, so I kinda wanted to enforce the CM/Sven fandom. It was also a 30-day project. It is really comfortable and easy to transport - that was a huge plus. And I was really surprised when some people came up to me and asked if I was the Timbersaw from ESL One - that really melted my heart!

ESL: What are you preparing for ESL One Frankfurt 2016 and what was the decision process behind picking this particular cosplay?
TanakhT: I am gonna bring my Dragon Knight cosplay, Knight of the Burning Scale set. The set looks amazing - it’s just ‘something different’. I want 2016 to be less insanely big costumes and more detailed ones. I fell in love with this set and contacted the maker about some details and for advice.

A video posted by Roman Pivec (@tanakhtcosplay) on

A photo posted by Roman Pivec (@tanakhtcosplay) on

ESL: Impressive! What part of the costume is the biggest challenge crafting-wise?
TanakhT: All of it! No, seriously - I made almost all the parts twice as I didn’t like the first one every time. But the one I spent the most time on was the helmet - it needed a lot of adjustments to look as badass as it does in-game.

ESL: What made you decide to come back to Frankfurt for another Dota 2 event?
TanakhT: I love Dota, I love the people behind it, I love the atmosphere. I enjoyed it so much last year that I will be staying a few more days this time.

ESL: What are you most looking forward to at this year’s event?
TanakhT: Some great games! But apart from that, I wanna do all the attractions this year. I hope that balloon guy is gonna be there again - I want a Dragon Knight’s ulti out of balloons. And I heard some rumors about some kind of ‘artist alley’, which sounds really interesting to me. I want this year to be more chill and less competing.

ESL: Thanks for talking with us and see you in Frankfurt! Are there any shoutouts you’d like to make?
TahankhT: The pleasure is mine! Yes, I would like to thank Tom for taking such great care of us cosplayers - he has no idea what it means to us. I would like to wish good luck to all the cosplayers coming - I hope they all finish in time! And, most importantly, my parents and my fiancée for their support and for letting me make a mess in the house and not complaining that much.

Join TanakhT and other great cosplayers in Frankfurt

ESL One Frankfurt 2016 will be Europe’s biggest celebration of everything Dota 2 so be sure to join us at this epic event - grab yourself a ticket here!