Admin
Turtle Entertainment GmbH
Share this article:
Tweet
A few days before the BlizzCon we managed to get an interview with one of Heroes of the Storm's most famous players, AceofSpades, who will be representing Fnatic onstage. Cristian "AceofSpades" Lippa had already seen successful in other games including Guild Wars 2 (Rank 1 World) and won several ESL Hearthstone Cups, but recently he went full pro for Heroes of the Storm.​ What does he have on his mind before the first ever Heroes of the Storm tournament breaks loose?

ESL: You and your team were dominating the European scene before it actually existed, with teams scrimming against each other after custom games were removed and despite problems finding each other. However, overall you could say that no team could really measure up to you. Could you tell us something about this time?
AceofSpades: Not many know that custom games were actually in the game months ago, and also that the EU and NA servers used to be one. We used to scrim against Glorious, Snowflake, the old 2ARC and SMG - I remember a few good games against Snowflake. Around the time the servers got split, custom games were also removed. Team Empire had a very good team back in the day, but they started disbanding when BlizzCon was announced to have no prize money. It was pretty sad when it happened - they had a great team and we learned a lot from old Empire. Around that time, ElNexo started to be good, so we started to scrim with them more. They are very good and very professional - it's always great to have them as scrim partners. I think they are one of the best teams in the world - at the moment they are the only team who often give us close games. We really respect them as players and as people.

ESL: As we mentioned before, you and your team were - and still are - very successful. For example, you participated four out of six ESL community cups and won all four you participated in. How do you explain your success? Is it because you started playing the game so early and have always been so serious about it?
AceofSpades: I know most of the players in the tournaments - they've been around even before we started, but I think the difference is that we came to the game with an already formed team, and we never disbanded. The people in the team are some of my closest friends, and they've been so for years. I think that our biggest strength is that we respect each other - it's really hard to play team games when the team environment is bad. When you're having fun with your friends, you'll perform better, you'll learn faster and you'll communicate better.

ESL: You and your team Team Moon was picked up very early (in August 2014) by mYinsanity, and you were actually one of the first teams to represent such a famous organization. How did you feel about the first time being under contract?
AceofSpades: With mYinsanity, we have a friendly agreement - we were not under contract with them, they are just good friends. They needed a good team to promote them on Heroes, and we needed the help that a sponsor can provide. I think now that Heroes is starting to be big, we'll have to part ways with them - they are a StarCraft II organization, and that's their focus. I think we'll remain good friends with them, though. They are really nice people, we enjoyed working with them and I think it's the same for mYi.

ESL: Every day more and more tournaments are getting announced. What to you think about the current competitive situation and how do you think everything will evolve?
AceofSpades: I think it will explode very fast like Hearthstone did. Blizzard is an amazing company - their games are always of the highest quality. You don't really need to hope for Heroes - Blizzard never fails. I think Heroes will explode as an esport.

ESL: You mentioned the BlizzCon before - this time you're going to be representing the very well-known Fnatic. In just half a year, you started playing for a famous team and were even invited to BlizzCon. How did you feel when you found out? Were you excited or sad that you couldn't compete with mYinsanity?
AceofSpades: I was very sad that I couldn't participate with my real team - I think we would've done great if we had the chance to go there as a five. Even though I’m not going to play with the Fnatic guys after BlizzCon, I’m happy that I got to know them. For example, Sase is a really stand-up guy - I’ve never seen a player as professional as he is. I remember he told me something like this: "I know many players trained hard and deserve to be at BlizzCon, but I will be the one to go and not them - that's why I’ll show them respect. I'll train as hard as I can, even though I might not play the game after BlizzCon - I’ll try my best for those that can't go." This was said during a random conversation. He wasn't acting out - that's how he really is. He's been practicing even more than me during the last month. 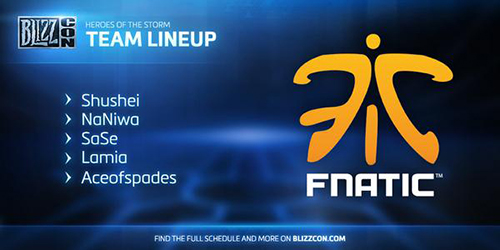 ESL: Do you have anything to say about the Fnatic lineup you'll be playing with?
AceofSpades: People expect horror stories about having to play with Naniwa in a team game. I don't have any complaints about having Naniwa in the team - he's been very professional with me and the rest of the team. Sometimes me and him play other games together - I’ve some hilarious stories that I don't really want to tell. He's unpredictable, I can't deny that - I guess part of the legend must be true. I met lots of people in esports, and he's among those I like the most.

ESL: Any plans for the future after BlizzCon? Will stay with your mYinsanity teammates?
AceofSpades: After BlizzCon I will keep playing with my teammates from mYinsanity, but maybe for another team.

ESL: Any recommendations for new teams who would like to grow like you did? What they should be aware of in this scene?
AceofSpades: Finding people you like to play with is key.

ESL: Any shoutouts?
AceofSpades: Shoutouts to mYinsanity and all my teammates.

ESL: Thank you very much for your time, AceofSpades. Good luck at BlizzCon!

What do you expect to see at the Heroes of the Storm tournament at BlizzCon and which team do you want to see come out on top? Tell us in the comments below!

Click here to tune in to the BlizzCon stream live at 20:00 CET!