Michal Blicharz
Vice President of Pro Gaming
Share this article:
Tweet
Søren “Bjergsen” Bjerg has held the eponymous mid position in the Team SoloMid lineup since November last year. Now on his way to Intel Extreme Masters San Jose, both he and the team have come a long way since then.

In the leadup to the main event at the SAP Center, Michal Blicharz took the opportunity to talk to Bjergsen about the path that took him to where he is today, how to deal with the demands of living the life of a professional League of Legends player and taking on the challenges ahead with his team.

Michal “Carmac” Blicharz: Hello, Søren, and thank you for speaking with us today. The last 18 months of your life must have been a complete blur. How was it to be a passenger on this trip?
Søren “Bjergsen” Bjerg: To be honest, it's been awesome. I have grown a lot since I started this crazy journey through esports, and I've learned a lot about myself and how to be in a work environment. I was a way different, less happy person 18 months ago, and I'm happy I was lucky enough to go down this road. There has been a lot of ups and downs, but I can say with confidence that this is the happiest I've ever been! 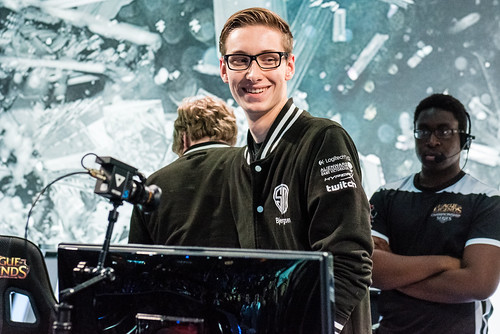 Carmac: How have you changed as a person since the NiP times?
Bjergsen: Back in NiP I think I was a lot more innocent. I was playing with a bunch of friends, and we didn't see it as much as a job as we did a hobby. I didn't understand the business side, building your brand, interacting with fans, etc. There was a big side I was missing - all I wanted to do was play the game that I loved. I was a lot more immature and didn't work with my team as well as I do now. Back then I thought someone else underperforming was their own problem when it’s really a team’s effort to get that player back on top.

Carmac: Is it true to say that after joining TSM you've been earning more than you thought you could earn in your life? What are you doing with the money?
Bjergsen: I am definitely earning a lot more than I thought I would at such a young age. My only actual job before this was being a paperboy, so I definitely have better working conditions now, haha. I am trying to save up, to build a good foundation for my future - it's unlikely I can stay in esports forever no matter how hard I try. Luckily both my parents work in economy, so they help me with managing my money and whatever questions I may have.

Carmac: What are the difficulties of moving across the world for a 19 year old from Europe?
Bjergsen: Now that I'm soon to be 19, it's a lot easier. At home I had a lot of difficulties with depression and more, so my parents helped me with whatever I needed. I didn't do my own laundry, I didn't cook, the main responsibility I had was my dog, to walk him and take care of him. That meant I had to get used to doing a lot of these basic householding things on a daily basis, but luckily I joined the team in the offseason and had a couple months to adjust.

Obviously there is also the part about being far away from my family, friends and dog who I love dearly. I didn't get to see them much this past year, but I keep in contact with them as much as I can. I'm excited to visit Denmark against in December. 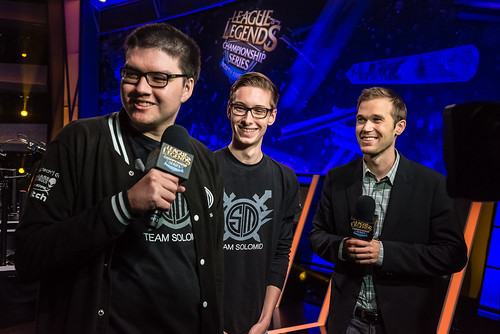 Carmac: What have you found outside LoL that kept you functioning and living a normal life?
Bjergsen: That's been something I had difficulty with. I have friends here, but not enough time to see them very often. After a couple months here, I got myself a French bulldog. He helped me have a connection outside of the game and my job, and sort of have an escape, a place where I could relax and be at peace.

Unfortunately it caused some problems in the gaming house, and I also wasn't playing/practicing to my fullest potential since I had to take care of a pet, so I had to give him to my friend, who is he very happy with now. Now the main things I do outside League to take some time off is being with friends, working out and watching TV shows. I feel like all those things let me forget and focus on something other than the game. I learned you can't just live and breathe the game, you need some time off - even just an hour a day will go a long way.

Carmac: Is there a lot of pressure when you play for TSM, especially on you, as you were brought in with the job of putting TSM at number one?
Bjergsen: There is a lot of pressure, but not from TSM, the players or management itself. It comes from the fans and myself wanting me to perform well. I had some problems with confidence during the summer split, and it affected my performance since I was nervous and scared to play to my fullest potential simply because I had a couple bad games.

It's important you don't let some bad games or scrims affect your mentality, since lack of confidence can easily break a player. Locodoco taught me that even if I don't play as well as I know I can, it's not the end of the world - it's all about what you learn, and ultimately to know why you didn't play to your fullest potential. He also taught me ways to relax before and inside the game if I was feeling anxious. In a couple weeks I got my confidence back and played much better around playoffs/PAX than I did the whole season.

Carmac: What was the key to taking the championship away from Cloud 9?
Bjergsen: The most important things were to figure out our weaknesses and their strengths, and coming up with a solid plan to play around both. It was important we adapted throughout the series and learned from what they showed us. I didn't go into that series with a lot of confidence. I didn't feel like we went into that series as the team I really wanted us to be, but we did well enough on the day to beat them. There's always room to improve, and I think we learned a lot of things that we can bring into Season 5 from playing at PAX/Worlds. 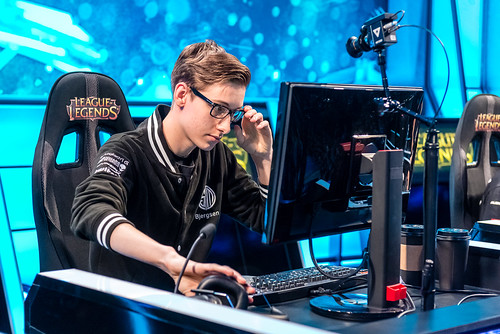 Carmac: How tough is it going to be to do it again, especially with the roster change?
Bjergsen: I'm not gonna lie, it's gonna be tough. The bootcamp leading up to Worlds was hard on the team - it's a close environment with 14 hours of practice every day. So it's gonna be hard, but I'll definitely enjoy it. The offseason has really shown me how much I miss scrimming every day, having a structive, the thrill of competitive games. I miss playing LCS every weekend, or practicing for an important best of five. I think we can do it again, and I think we can do it better this time!

Carmac: You're talking about Cloud 9 like an underdog and not the title defender. Why is that?
Bjergsen: As much as I'm happy we won PAX and got out of groups, I don't see this year as a complete success. I see a lot of room for improvement, and a lot of room to grow as a player and a team. I strive for us to do better at international tournaments, and to show we can be a real force in the competitive scene. I didn't expect us to win PAX, so it was more of a nice bonus. I'm gonna have real expectations of us doing well this year and taking at least top two or I'll be disappointed. 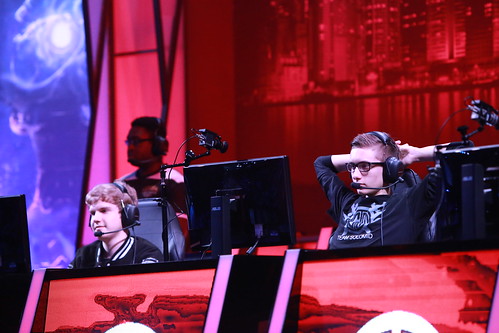 Carmac: Please correct me if I'm wrong - you don't have a replacement for Amazing lined up yet?
Bjergsen: Not officially :P Can’t say much.

Carmac: What are you looking for in Amazing's replacement?
Bjergsen: Some of the things I'm looking for in a jungler would be mechanical skill, communication and work ethic. I think pretty good mechanics are obviously a good foundation for building a world-class player, and we don't want a downgrade in that sense. Communication is extremely important in the jungler, since you're constantly talking to all lanes at the same time to figure out when and where to gank. It's important the jungler is talkative and reaches out to the lanes, asking what they want. 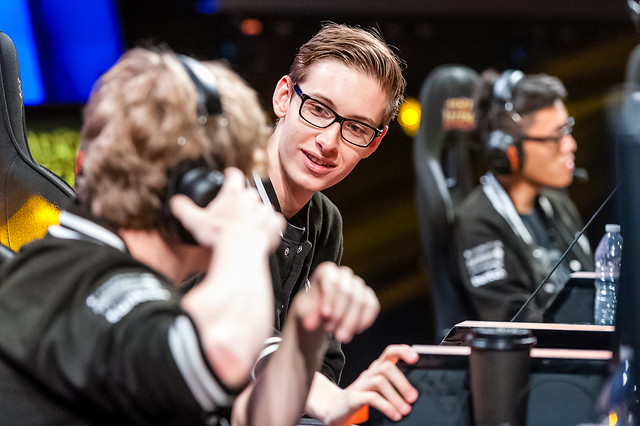 Last would be work ethic, which is something that's really important to me. I wanna see players in my team that want and care about this as much as I do, and show it in their practice, their contribution to team talks and overall dedication to the game. I want someone who is willing to watch through replays and VODs of other regions because he is hungry to learn, not someone who says it's boring and wants to play solo queue instead.

Carmac:You come from Europe and play in NA. Which LCS region is stronger?
Bjergsen: I can't say which region is stronger - both regions have developed a lot since I changed. Back when I played in EU, there were very few coaches/analysts working on the team - mine had none. Now it's been over a year, and the infrastructure in both regions has become much better.

I think the regions are extremely close, and are likely gonna stay this way for a while now. I enjoyed playing in both and don't have a preference - it will be wherever my career brings me. I don't have any intention to leave TSM, though - I'm very happy here and the organization treats me very well. 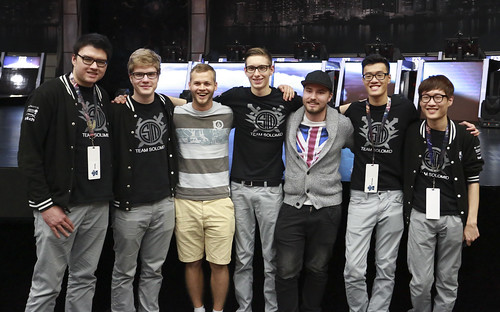 Carmac: What should the fans expect of Intel Extreme Masters San Jose, both from you and the event in general?
Bjergsen: Expect a good show, and great matches. Unfortunately Locodoco and Lustboy have been getting their visas, so our practice starts about a month later than the other teams going, and also playing with a new member. We're definitely gonna be at a disadvantage, and it won’t be easy for us to win, but if we make the most use out of our limited practice time, I believe we can do it. I hope I can perform well, since I have been playing a lot, even during the offseason, trying to perfect my play. Intel Extreme Masters San Jose will be a chance for me to show that!

Think Team SoloMid are going to come out on top at Intel Extreme Masters San Jose? Give us your take in the comments below! Additionally, if you enjoyed this interview, why not read our interview with Cloud 9 jungler Meteos?