The ESL One Battlefield 4 Winter season finals are just a couple of weeks away and the excitement is building. Australian esports organization SYF Gaming’s Battlefield 4 team was only officially formed a few weeks ago but they’ve already been turning heads. Here we chat with team captain Nathan "CryptiK" Humphries about SYF’s past, present and future - will we be seeing an Australian victory in Cologne?

ESL: Hi, Nathan! So what made SYF Gaming decide to get into competitive Battlefield 4?
Nathan "CryptiK" Humphries: After we left Exile5, I had approached SYF about the possibility of picking up the team to give us a hand getting overseas. They saw it as a great opportunity to get their name out there on an international level and took it.

ESL: Why did SYF opt to pick up the Exile 5 lineup in particular?
CryptiK: I had a little history with SYF in Call of Duty, so I knew the management and the guys behind the org as they knew me so the talks went fairly smoothly. I had outlined them on the new team we had built up to take on the European and American teams on LAN and basically showed them that this would be a great opportunity for both sides.

ESL: The very first game officially under the SYF Gaming banner was against Event Horizon, where you emerged 2-0 to progress to the winner’s bracket. What do you think helped make it such a success?
CryptiK: Just practicing when we could. The line up had some new additions in the form of former LG players Krypton and Rabbit that really added some strength to the core. And myself, Wiggin and Chus being together in a team for quite a while and twice attending an ESL One LAN allowed us to all come together and form a strong lineup that made it undefeated through the season.

ESL: How are you preparing for the rest of the ESL One proceedings?
CryptiK: Well, practice has been hard to come by. We have generally been going through and refining how we play each map and taking up practice against teams from Asia and America when we can.

ESL: Is there any matchup you’re particularly looking forward to?
CryptiK: Well, depending on what group we get, we'd love to go up against either PENTA or Epsilon. When we went over last we didn’t get to play either of those teams, and we would love to give it a go.

ESL: Are there any you’re dreading?
CryptiK: Not particularly. We are pretty much content with any team we will play at this final. Without being too cocky, if we can get some decent practice in I think we can bring it to the teams in Europe. 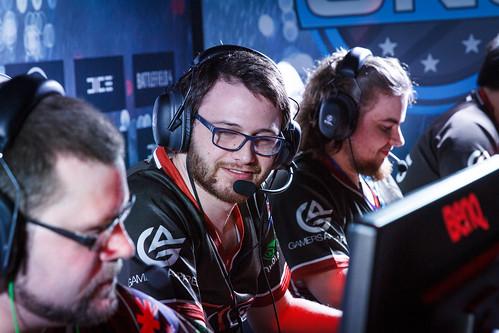 ESL: How do you feel about going from Call of Duty to Battlefield? What made you decide to make the change?
CryptiK: I actually sort of started with the Battlefield series really with Battlefield 2, and made the shift to Call of Duty when 4 came out before going on a two-year hiatus and returning to play for SYF while also playing a little Battlefield on the side. Call of Duty just sort of got stuck in this “will it die or won’t it die?” and stayed there for a long time so - moving over to Battlefield at the time was to try and find some stability. I mainly started focusing on Battlefield when I got picked up by Exile5 during Battlefield 3, and I'll be honest large format was a lot of fun.

ESL: What do you think makes a good competitive Battlefield 4 player?
CryptiK: That depends on the game mode. Large format and Squad Obliteration mainly rely on positioning as well as aim whereas Domination relies mostly on fragging power due to the mode being a glorified TDM. But in the end it’s the same as any FPS - someone who can think on their feet, stay calm and frag up a storm is generally what you look for.

ESL: How do you see Australia’s position in the global esports scene?
CryptiK: Still growing. At least now with the larger esports providers like ESL making a step into Australia we have seen it grow a lot faster. Four years ago it was rare to hear about any Australian team going overseas. You'd have the odd League of Legends team, I guess, but that's about it. Australia had really struggled to have any successful international presence back then, but these days we are doing a lot better. We have had three international Counter Strike representations as well as three in Battlefield, more in League of Legends and a fair few in StarCraft II as well. And I think we have done pretty well as a country that is extremely small and isolated in comparison to esports in other countries. I think 2016 will be a big year for Australian esports, and I can only hope it will be bigger than 2015 has - just don't give up on us :) Competitions like ESL One give us the opportunity to branch out and grow.

ESL: Do you have any advice for any up-and-coming FPS players wanting to follow in your footsteps?
CryptiK: Practice and practice wisely. Make a name for yourself and don't be a clown about it.

ESL: Thanks, Nathan - the final words are yours! Any shoutouts you’d like to make?
CryptiK: I'd like to make the obvious shoutout to SYF Gaming for coming through and getting us ready to get to ESL One and a shoutout to the teams who played this season and helped us practice. Also a massive shoutout to the Asian community, the most forgotten of the Battlefield community. They are extremely strong and didn't mind helping out with practice when we needed it - I hope one day to see them get some of the representation they deserve. And another obvious shoutout to ESL and EA Australia, I know we may not be the biggest community around, but we really appreciate you guys sticking it out with us.

The ESL One Battlefield 4 Winter season finals will be taking place at the ESL studios in Cologne, Germany on Saturday the 12th and Sunday the 13th of December - be sure to check out the official website and follow ESL Battlefield on Facebook and Twitter for all the latest updates!