When we last spoke to balloon artist Daniel "Fudd" Ravia he was recovering from ESL One Frankfurt 2015, having used around 1,800 balloons to make fantastic Dota 2 themed balloon sculptures for fans during the event. Since then he’s repeated this feat at ESL One at New York, but will be treading new ground when makes his way to the SAP Center for Intel Extreme Masters San Jose in November. So what does he have in store for us this time?

ESL: Hi, Daniel! We’ve interviewed you twice now, both before and after ESL One Frankfurt. What have you been up to balloon-artistry-wise since we last spoke?
Daniel "FuDD" Ravia: Hello! What have I been up to? Doing some birthday parties, working some weekly restaurants. Most recently, I was doing balloons for ESL One at New York Super Week - that was a blast! And trying to come up with more gaming and balloon ideas! 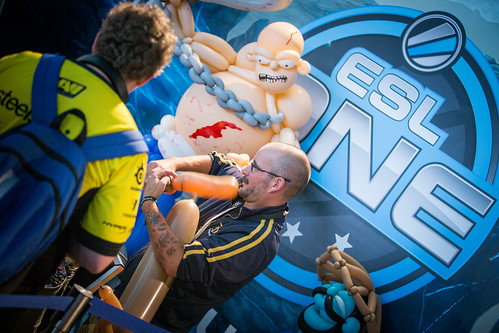 ESL: Have you had much of a chance to just relax and play some video games?
Daniel: I have! Having not played Dota 2 and worked two Dota 2 events, I felt like I needed to get some hours of Dota 2 under my belt. So far I have about 46 hours logged on the game… I have yet to play anything other than hard bots and am trying to find a hero or two I enjoy (Shadow Shaman, Ogre Magi, Wraith King have been some of my favorites so far). Other than that, some Wii-U time with the family playing Mario Maker, Splatoon and Mario Kart 8! I’ve also been struggling with picking up StarCraft II: Legacy of the Void.

ESL: You’re now on your way to Intel Extreme Masters San Jose! What sort of things have you got in store for fans at the SAP Center?
Daniel: I love letting the attendees let me know what they want. No matter how much I practice, it always seems people request things I never even thought about or have tried. And I actually love being able to create things from photos and pictures - it’s a challenge I enjoy taking! All that said, I am expecting lots of League of Legends characters and many weapons and bombs coming from the Counter-Strike fans! 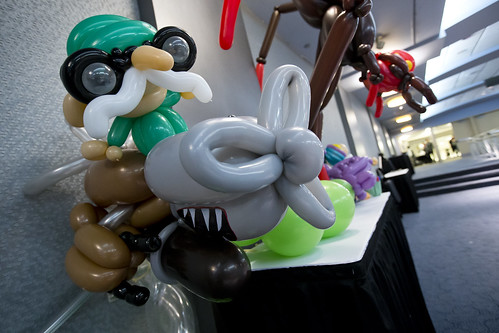 ESL: Have you done much preparation for the event yet?
Daniel: Other than looking through photos of champions and trying to get a broader weapon base, I have yet to start practicing a huge amount for the event. Truthfully, Halloween events and builds have been taking much of my free time, although I do plan on working on some builds for both games to get more familiar with the characters and champions, etc.

ESL: Do you know the amount of supplies you’ll be bringing with you?
Daniel: My rule for these events for the amount of product I bring (and it’s worked so far, hahaha) is wayyy more than I could possibly need, which for two days will be somewhere in the region of 15 to 20 thousand balloons plus as well as markers, scissors, etc.

ESL: We hear you’re bringing backup this time! Can you tell us a bit about your partner in crime?
Daniel: I’m bringing a balloon friend! I am super excited to have another talented artist joining me for this event. Sean Rogers is a great balloon artist I had the pleasure of working and jamming with at a balloon convention in Vegas in January this year. I was impressed by his balloon talents and we got along wonderfully. I feel like he will be a great addition and allow us to get to many more people twice as fast! Sean lives in the Lake Tahoe area and is originally from Virginia.

ESL: ESL One Frankfurt was all about Dota 2, but Intel Extreme Masters San Jose is dedicated to League of Legends and Counter-Strike: Global Offensive. Have you had a chance to get any hands-on experience with them?
Daniel: With League of Legends I have not. Counter-Strike is a game I started playing back when it first came out (and played for quite some time until Brood War took over my life, lol). As a matter of fact, when you look at my gaming nickname “FuDDx”, the X is from my very first gaming clan the X-Men, which was a Counter-Strike team made up of a few locals and some other friends we made while playing CS. 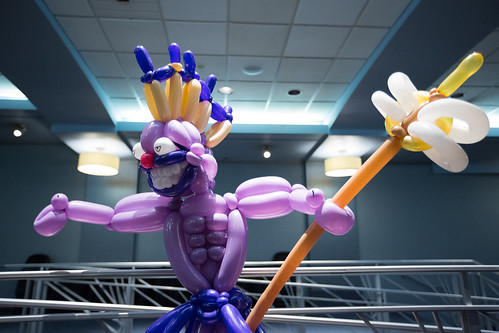 ESL: Do you have a favorite League of Legends champion?
Daniel: Asylum Shaco looks cool! As does Zed and Nemesis Jax. But I’m just going off looks and what I find appealing - I have yet to try the game and actually see if I enjoy playing them. I do plan on getting a few games in very soon, though!

ESL: How do you think balloon twisting at Intel Extreme Masters San Jose will differ from ESL One Frankfurt?
Daniel: Other than the obvious difference in the games being highlighted, I am thinking there will be quite a few (modern) weapon requests based off Counter-Strike. As far as League of Legends goes, I think having the Dota 2 hero experience will help so much in creating the LoL champions. The other notable difference will be having another artist to bounce ideas off, get to many more attendees and to be able to make time to use the facilities and grab some food etc. - hahahaha!

ESL: Is there a particular team - or teams - you’ll be supporting at the event?
Daniel: I’m looking forward to great games and amazing times. I’m not familiar with how well any of these teams are doing, but I would be pretty happy if Fnatic takes the win for LoL and Ninjas in Pyjamas for the CS:GO part, mostly because I love the team name!

ESL: What are you most looking forward to at Intel Extreme Masters San Jose?
Daniel: Being around gamers! Pushing my art and my limits with it. It truly is a dream come true to be able to bring my art to gaming. I hope I can wow the attendees and continue to grow my art and its connections to the gaming world.

ESL: Is there anything you’d like to say to the fans who’ll be at the event?
Daniel: Just a huge thank you! It truly means so much to be a part of these events. I hope that you all follow me and keep letting me know how I can improve and serve this amazing community better! I cannot wait to make a balloon for you and get some time to talk and share with you all!

ESL: Thanks a lot for talking with us again, Daniel, and good luck at the event!

Intel Extreme Masters San Jose will be bringing League of Legends and CS:GO to the SAP Center on November the 21st and 22nd - grab your ticket here to make sure you don’t miss out on some incredible esports action as well as Daniel’s amazing balloon art!

You can also check out our previous interviews with Daniel below: