Hans Oelschlägel
Editor / Content Manager
Share this article:
Tweet
Last week we announced that Evil Geniuses will be one of the invited teams for ESL One Frankfurt 2015. Long-time offlaner Saahil “Universe” Arora had a few things to say about his team chances in the tournament as well as how his new teammates are performing!

ESL: EG has finished in second place during both previous ESL One tournaments and now you’ll get your third shot at the trophy with a revamped roster. Are you confident that you can come out on top this year with the help of your new team members?
Saahil “Universe” Arora: We have a new roster that is hungry to win so I think our chances to take this event are as good as ever.

ESL: Your team had an incredibly strong showing at the Dota 2 Asian Championships (DAC) earlier in February, winning the tournament ahead of all the other big-name teams in the scene. Do you think your team can beat anybody in a best of five series at the moment?
Universe: Dota is a game that is very hard to predict. If our team has sufficient time to make preparations towards the draft, I think it’s very hard to beat us in a best of five. 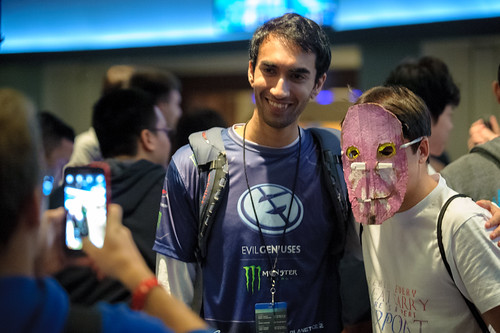 ESL: A lot of eyes are on suma1L, who has replaced Arteezy in the mid role. How do you evaluate his performance at DAC considering he only just recently joined the team?
Universe: suma1L’s performance was outstanding. I knew what kind of player he was after we played at Dota 2 League. Even though we lost, I could tell he was a championship player and he proved it.

ESL: PPD voiced his opinion about online qualifiers a few weeks back. Do you agree with his sentiment that an accomplished team such as EG should be invited directly to most competitions? Playing in qualifiers could help a team achieve momentum before a big tournament after all.
Universe: I think the problem with online qualifiers with most tournaments is that it kills the hype. Long, drawn-out qualifiers that could potentially stop a top team from attending the main event are quite destructive. Short qualifiers where the fans know the stake of every single match and guarantee fresh blood are the way to go.

ESL: What was your team’s reaction when you posted your Disney collages on Twitter? They are a big hit with the community, but can your teammates handle the Disneyfications?
Universe: None of my team members have ever had a problem with them - if they did, I wouldn’t tweet.

Do you think Evil Geniuses can dominate ESL One Frankfurt the same way they handled the Dota 2 Asian Championships? Let us know in the comments below!

For more information, visit the official ESL One Frankfurt site.
Share this article: