Philipp Saedler
Senior Editor
Share this article:
Tweet
Fear spread among the German players within the ESL Pro Series when a big list of top-tier Koreans entered the A-Series to qualify for the StarCraft II Summer Season. The appearance of such well-known players as HyuN, MC, YoDa and more made people think the playoffs and finals would be devoid of any German players. There was a lot of discussion but the rules did not change, and so every player from or living in Germany, Austria and Switzerland continues to be allowed to compete in the ESL Pro Series.

However, it never got to the scenario of lacking Germans in the German championship as only Patience and Golden were actively playing the cups and scoring points. The rest of the Korean elite who actually made it far in the A-Series were in reach of the cup but chose not to compete. We only saw two Koreans in the cup and group stage, but both gave some good matches and made it to the semifinals while a lot of German star players had to fold.

Hard times for the German elite

With two spots taken by the Koreans and only six left in the group stage, room for failure was little to nonexistent. The big names in German StarCraft II as well as a relative newcomer turned out to be challengers for Patience and Golden, with well-known faces Marine, HasuObs, ShoWTimE, GoOdy and Socke advancing, later joined by Lamboking. 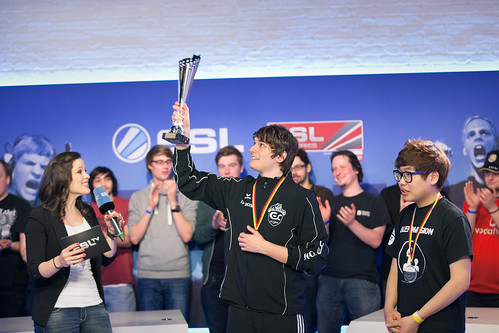 Can ShoWTimE triumph over Patience once again?

During group stage, both the reigning and prior champions of ESL Pro Series had their time to shine as ShoWTimE knocked Patience into second place in Group A and Marine took the first spot over Golden in Group B. This outcome brings us one big story to look forward to as both of the Germans will face the Koreans in the semifinals.

Who will take the German crown?

The most recent German StarCraft II champions will have a tough fight to reach the grand final on the stage at gamescom, but the crowd will definitely back them up.

Looking at the latest results, and especially those of the group stage, both of them lost a map to the Koreans in their best of three series. Now going into the best of five series for both the semifinals as well as the grand final, we can hope to see another epic set of matches just like those in the spring finals, where it took ShoWTimE and Patience the full five games to determine the winner.

On Wednesday starting at 13:00 CEST, you will get to see Korea and Germany clash followed by the grand final afterwards. Join us at gamescom or live on ESL TV in German and English.

Do you think the Germans can keep their title in Germany? Let us know in the comments below!
Share this article: