Admin
Turtle Entertainment GmbH
Share this article:
Tweet
US$50,000 is a lot of money for a tournament in a growing competitive scene, but this isn’t just about the money. This is an important chance for two teams to snag one of four spots for the EU playoffs in November, which could take them to the Smite World Championships in January.

Invites to the tournament were based on the points earned throughout the last ten weeks of qualifiers, and the top four teams were none other than Cloud 9 HyperX, Team SoloMid, Team Coast Blue and SK Gaming.

With 635 points and thus narrowly claiming the top of the standings, Cloud 9 have shown time and time again why they’re one of the top teams in Smite. They are consistently in the final two in the weekly events, and are certainly favorites to win a place in the playoffs. Close behind them with 620 points, TSM aren’t far from first place overall, and having played and beaten Cloud 9 on multiple occasions, it’s safe to say there’s a certain rivalry between the two. You can be sure that the matches between these two teams will be quite the spectacle! 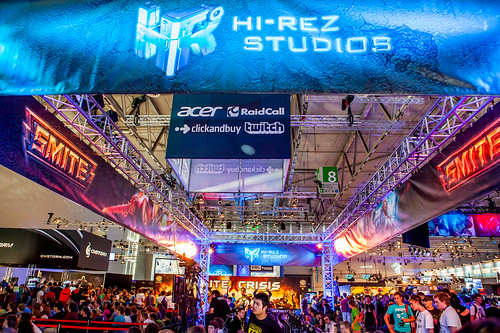 With 314 points - less than half the points of Cloud 9 -  Team Coast Blue are lagging a little behind the top two. That being said, they’ve beaten both teams in the past and are certainly not to be disregarded. With everything on the line, expect Coast to do their homework and give it their all.

Finally, not too far behind Team Coast are SK Gaming, who scored 242 points throughout the qualifiers. This was a tricky number as they were actually tied with I I I I I, but managed to narrowly squeeze their way into fourth place thanks to Team Coast’s victory over the latter. Just like Coast Blue, SK have managed to beat top teams in the past, and although a dark horse, they should certainly not be disregarded. Check out a recent interview with them here.

The tournament will feature a single elimination bracket with best-of-three semifinals and a best-of-five final. This format will likely favor Cloud 9 and TSM, who have gathered a lot of experience playing best of threes as the result of their deep runs in the weekly tournaments.

Saturday’s matchups will be as follows: The all-important prize money will be split as follows:

Great, I want to come!

Good! It’ll be a great time to see the action up close and even get to meet some of the players. The tournament will be held at our studios in Cologne, Germany on the 26th July, and casting will be HiRezBart, Hinduman and Jason Kaplan. You can read up about full ticket details here, or if you want to grab a ticket straight away, you do so here. See you there!
Share this article: