Admin
Turtle Entertainment GmbH
Share this article:
Tweet
Apart from at BlizzCon, it’s rare that we see the best players from GSL Code S, WCS America and WCS Europe clash in an international tournament. Intel Extreme Masters Shenzhen has proved one thing: America and Europe can still compete with Korea. Once players remove themselves from the hyper-competitive environment in Korea, people expect them to decline in skill. However, this has not proven true. Though still Korean, they have become honorary foreigners, and have shown that they can still rumble with the best.

The initial match of the day was highly anticipated, with Taeja finally facing off against one of the best KeSPA players in the world. Since his move from WCS Korea to WCS America in mid-2013, Taeja has only found Korean opponents in those who had also moved away from the highly competitive environment of Korea. His move from Korea also signalled the beginning of his dominating performance in international tournaments (save for a slump at the beginning of this year), and this was evident today as he took the set in an outstanding 3-0, which many had hoped for but few truly believed would happen.

Game one turned into a long macro game, with Zest playing highly defensively. Both players were extremely cautious, finding it difficult to locate an engagement in the late game. Finally Zest blundered when he took an engagement without an Observer, allowing Taeja’s cloaked Ghosts to wreak havoc. From there, Taeja continued winning small engagements, finally wearing the Protoss down. 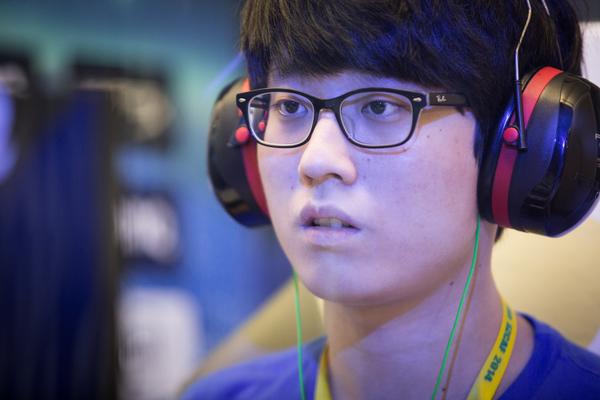 Zest completely switched up his strategy from game one, going for early aggression in game two. All hope seemed to be lost for Taeja, when Zest’s army, comprising of two upgraded Colossi and Stalkers, marched across the map unscouted. However, he defended remarkably without taking too many losses. Despite losing a few small skirmishes after, Taeja pulled all his SCVs off mining and eventually won the game.

Zest tried once again to win the game early in match three. He put on some early pressure with a small army of Stalkers, who would go on to do vast amounts of damage to Taeja’s economy. Zest kept the pressure up, almost taking out Taeja’s Command Center in his natural. Rather than trying to prolong the game, particularly with his economy so damaged, the Terran decided to counterattack. Zest was extremely unprepared for this and simply did not have enough to defend, leaving the Terran to move on to the semifinals in a perfect 3-0 finish.

Jaedong is as versed in ZvZ as it comes. In fact, this year alone he has played no less than 80 competitive matches of his legendary JvZ. That being said, Snute is not exactly inexperienced when it come to this mirror matchup, having played 68 sets this years. Although, Jaedong is renowned for his ZvZ, Snute actually comes out ahead this year, winning 84% of his matches as opposed to Jaedong’s 60%. This did not matter today, however, when Jaedong managed to inch into the league in a classic game between Evil Geniuses and Team Liquid.

Game one was extremely aggressive from both players. Snute was aware that Jaedong likes to build his Hatchery at 15 supply, and decided to build his Spawning Pool at nine supply. Jaedong allowed his Hatchery to complete to buy more time for defense. He managed to push back the aggression from Snute, eventually putting on pressure himself. Jaedong overwhelmed Snute with a greater amount of Zerglings and better Baneling hits, forcing Snute to GG out of the game. 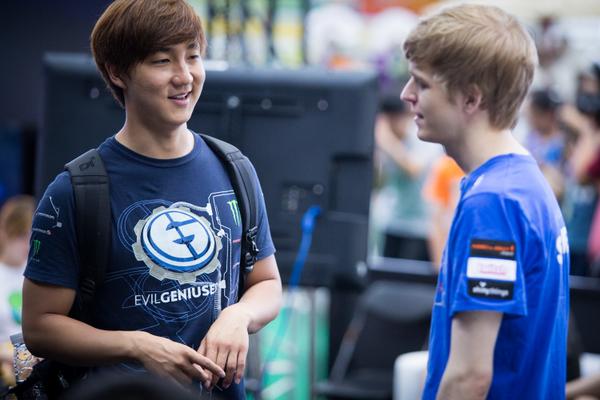 The next two games were more one-sided, but this time in Snute’s favor. In game three, the Norwegian played an excellent macro game, allowing Jaedong to scout his tech choices before cancelling them and building something else. He was able to build fast Roaches with upgrades, as well as building up his economy. After an unfortunate engage for Jaedong, the series was evened up 1-1. The next game was played on Deadwing, where Snute began the game with an early pool. It was unexpected for Snute to do this on such a large map, and when his playstyle heavily favors macro games. However, he caught Jaedong off guard, allowing him to gain the advantage that would allow him to eventually win.

Jaedong has never been one to be phased when playing from behind, and he showed that today. Snute once again took the early lead in the fourth game after taking the offensive. Instead of transitioning into Roaches straight away, Jaedong pressured his opponent with Banelings and Zerglings, somewhat equalizing the game. Superior Roach numbers and positioning allowed Jaedong to take it to the last game.

Initially, it seemed that both players were going to play an extremely clean and safe game. However, Snute once again was the aggressor when he built early Roaches, reinforced by Banelings. All hope seemed lost for Jaedong, who only had Zerglings, Queens and a few Spine Crawlers to defend. In an outstanding show of resilience, Jaedong managed to defend. After several more engages, the Korean managed to cripple his opponent’s economy enough to take the win and the spot in the semifinals.

After Snute dropped out of the tournament, Jim was the remaining foreign hope. Playing on his home turf, Jim was the obvious crowd favorite. Neither Jim nor San have reigned victorious in WCS America and WCS Europe respectively. However, both went toe-to-toe with world-class players in order to advance this far in the tournament. Jim continued his winning streak from the group stages, and took the set 3-2.

The first game started with both players going for a Stargate. An Oracle from Jim, combined with a slow reaction from San, allowed him to kill off a number of Probes and take the economic advantage. The Chinese player committed heavily to a SkyToss build, throwing down another Stargate and a Fleet Beacon. Despite scouting a second Stargate, San did not react fast enough, allowing Jim to take an easy win.

The second game started with another battle in the sky. Jim snuck an Oracle into San’s base, taking a small economic lead off Probe kills. This was quickly countered by an attack from San, who was able to equalize the game. Both players committed to Phoenixes, although Jim failed to upgrade the range for them, and eventually San overwhelmed him with a greater number of Phoenixes to take the game.

San tried a different tack in game three, putting on early pressure with Stalkers. However, poor defense at home allowed Jim to obliterate his Probe line with an Oracle no less than three times. Despite having a huge amount of Stalkers, Jim managed to amass an army to defend against it. Eventually San decided that the battle was lost and exited the game.

Both players went for the Stargate in the fourth game, with San choosing to go for the early aggression. Jim defended his second base well, although he overextended and unnecessarily lost units. With San only on one base, he managed to reinforce his army with greater numbers, and made his Chinese opponent severely regret his error in judgement.

In the fifth and final game of the back-and-forth mirror matchup, Jim once again went Stargate, although this time he proxied it. San managed to guess what his opponent was doing, and had the appropriate defense prepared at home. After a failed attack from San, Jim took a staggering lead in the game. Desperation Dark Templars from San did not do enough, leaving Jimcredible to take the win in an extremely tense game.

After becoming almost irrelevant in the competitive scene, INnoVation is slowly climbing back to the top. It seems like an age ago since INnoVation was guaranteed a top spot in any tournament he deigned to turn up to. As almost a complete opposite, we have Solar, who was firmly relegated into Code A last year until he finally made it to Code S for two consecutive seasons, finishing in the round of eight in the last. Despite ZvT not being his best matchup, Solar took the series in a convincing 3-0 victory.

The first game was extremely fast-paced. An unscouted Roach and Baneling attack proved fatal for INnoVation. San’s first wave of aggression was eventually fended off, although he did significant damage to INnoVation’s defensive structures. It did not help the situation that INnoVation failed to rebuild his defences, but also salvaged Bunkers, allowing San to march into his second base and take the win. 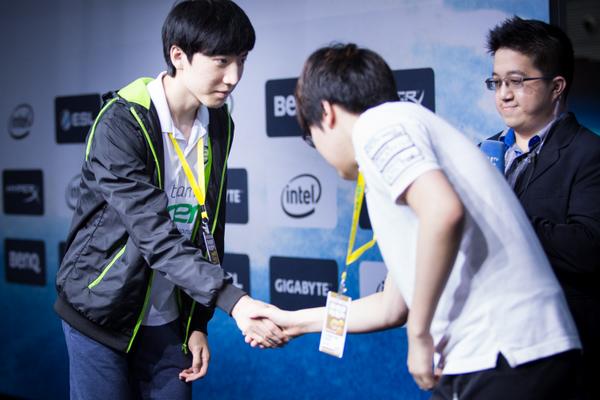 The second game was extremely hectic. INnoVation seemed to take the early advantage, controlling the map with his Hellions as well as denying Solar’s creep spread. Things looked bad for the Zerg as he was forced to produce defensive Banelings. However, Solar defended against the push from the Terran extremely well. Eventually he produced a huge quantity of Banelings, allowing him to clean up INnoVation’s army as well as brute forcing his way into the Terran’s third base. INnoVation’s economy was left in tatters, and one last engagement forced him to GG out of the game.

Solar went for an entirely different strategy again in the third game, opting for a lethal Roach and Hydralisk timing with 1-1 upgrades. He managed to catch his opponent completely off guard and took although he sacrificed a lot of his SCVs in order to do so. With little to no economy, INnoVation was forced to try and engage. Solar’s superior economy allowed him to quickly reinforce, taking the set in a surprising 3-0 victory.

If you’ve missed out on any of the action, make sure you read all about it in our day one, two and three recaps. We’ll be back tomorrow at 03.00 CEST with two epic semifinal matches between Taeja and Jaedong and Jim and Solar - and the grand finals - tune in then to see who will win the US$10,000 and 750 WCS points.
Share this article: