A little over a week ago the groups for Poland’s first major of the year were drawn, hyping us even further for what’s coming up next week at ESL One Katowice 2018 powered by Intel. Without any further ado, let’s jump straight into a closer look at Group A!

A total of 16 teams, 8 invited and 8 qualified, are set to clash for a chance to grab the lion’s share of the astonishing $1,000,000 prizepool and the 1,500 Pro Circuit Points! Followed by the three day long group stage, the event’s playoffs will be played between the 23rd and the 25th of February; so buckle up and prepare yourself for some of the best Dota we’ve seen this season! 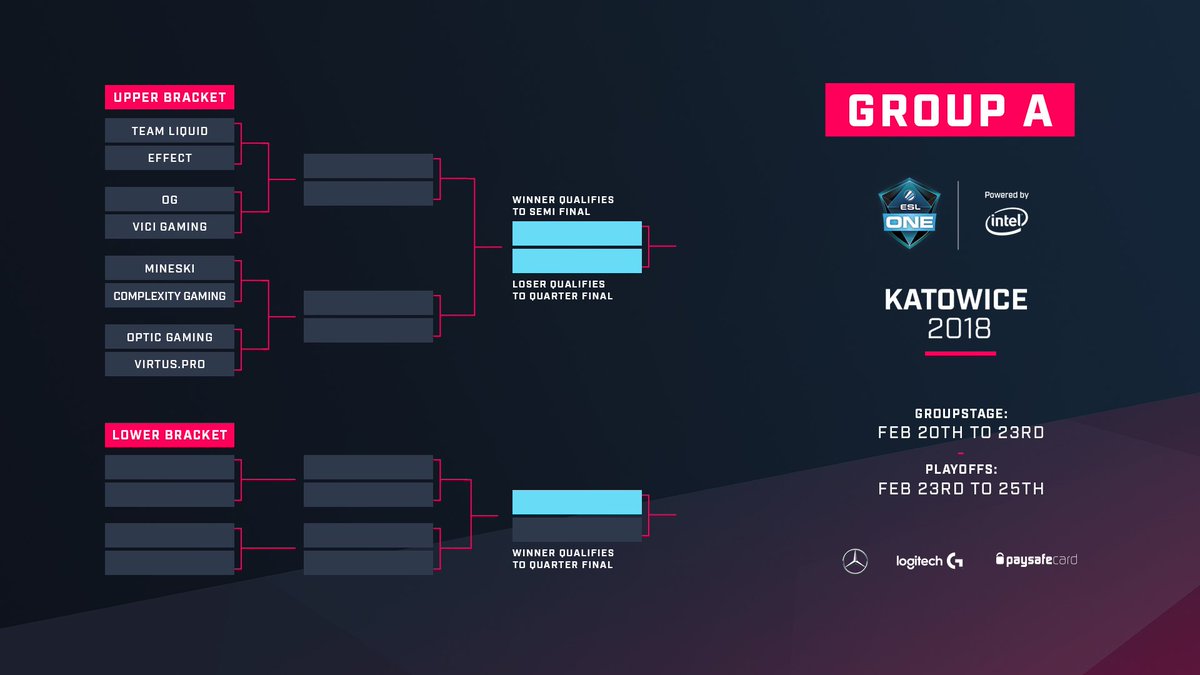 It is always pleasing to the eyes watching Team Liquid’s performances. Even before their TI win in August, the squad has been delivering exceptional results in every event they participated. With less than 700 points separating them from Team Secret and their astounding results this past month - 1st place at iLeague Season 4 and 2nd at ESL One Genting - Team Liquid is on a well-lit course in bringing another major title back home.

Even though Effect is one of the newest teams competing in Katowice this year, having formed roughly one and a half year ago, they have shown some potential during the CIS qualifiers were they outbested reputable names in the Dota 2 scene such as Team Spirit and Vega Squadron. And only a few days ago they managed to qualify for yet another Major in DAC 2018, showing that their ESL One Katowice qualifier run was anything but a fluke. Other than that, the fact that this is the squad’s first ever major event in combination with the limited professional experience of the roster, it’s really hard to place any bets on them.

The talent incubator. Literally. OG is one of those teams that when you see them competing you know that they CAN finish at the top spots, no matter what their roster is. Unfortunately, though, we haven’t seen much of OG’s previous glory shining in any major event that took place after TI7. While they have managed to qualify for various minor and major events, they unfortunately fell below expectations in most with the exception being MDL Macau. It feels like even though they have the potential to bring results and return to the spotlight, the current roster is struggling to do so, despite the immense individual experience they all have. Much alike Effect though, I wouldn’t bet my money on them unless they find a way to adapt to the current Dota 2 status quo.

Things are starting to get tricky now. Vici Gaming has risen to once again become one of the strongest teams in the world, but as always context plays an important part in Dota 2. Even though they managed to snatch a 5-6th place finish at ESL One Genting and a couple of major silver medals, it is still unknown whether they will be able to stand against titans in the likes of Liquid and VP. Their first matchup is against OG and chances are that they have what it takes to defeat them but coming up next they will have to face Team Liquid and it still debatable whether they are able to overcome this obstacle.

Mineski’s roster has the potential of a world-class team and is undoubtedly the strongest five-man squad in SEA. Despite that though, as discussed in a previous article, Mineski are shaky and the roller-coaster they had for results stands there to prove it. They got a really poor finish at ESL One Genting 2018, finishing 9-12th, and one week later there they are, grabbing a bronze medal at StarLadder i-League Season 4, thus making it impossible to say whether they earned a momentum they can hold or whether it was just a spike in their performance. That being said, with a win-rate of roughly 60% in a total of 262 games, they do have higher chances of beating compLexity Gaming, even though on their head-to-head confrontations they stand tied.

Hailing from North America, compLexity Gaming made it to the top 16 teams and for those that keep an eye on the scene, that shouldn’t come as a surprise. Despite their mediocre results at Captains Draft 4.0 (5-8th), ESL One Genting 2018 (9-12th) and StarLadder i-League Season 4 (5-6th), compLexity gaming have been consistently trying to keep a steady level and improve.

We’ve seen this whole concept of forming All-star teams and have them compete quite a few times in the past, and OpTic Gaming is no different. Having former TI level players like Pajkatt, zai and ppd in your roster raises the expectations but the big question still remains: are they ready to take on Virtus.pro? The answer is not that simple as one might expect. Individually they all have more than it takes to clash with VP, but on the other hand this is a team that lost twice to Animal Planet, now signed by Iceberg Esports, and barely won during the Last Chance Qualifiers for Katowice.

There’s not much to be said about Virtus.pro either. They are currently playing some of the best Dota we’ve seen from them, following their top spot finish at ESL One Hamburg 2017, they have also seen a number of 2nd to 5th place finishes, including one more Gold medal at Dota Summit 8. It’s uncertain though, if they are able to take down Group A favorites, Team Liquid. On their more recent battles, Virtus.pro can be found on the losing side of the line with a mere 43% win ratio. That in addition to Lil’s very recent departure from the team and his replacement by RodjER raises some doubts as to whether he was given enough time to practice and blend with the team.

See you in Katowice

Tickets to the event are available so be sure to join us for Poland's first ever Dota 2 Major held in the legendary Spodek arena! For all updates, follow ESL Dota 2 on Twitter and Facebook.